On 7 November 2018, just in time for Remembrance Sunday and the centenary of the Armistice, stonemason Andy Chalk added a new marble stone to the War Memorial on the Village Green. It lists the names of eleven soldiers whose names were missing from the memorial. 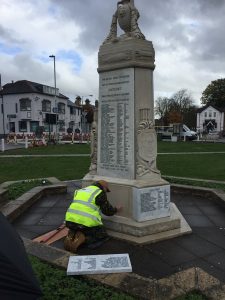 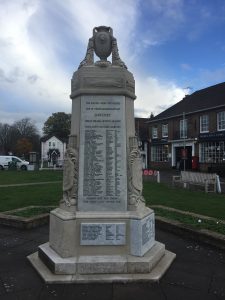 A few days later, on Sunday 11 November 2018, the centenary of the WWI armistice, the village was able to remember 11 more of its WWI soldiers thanks to DVS research. One of these soldiers has a descendant living in the village who was invited by the British Legion to lay a wreath in his honour at the war memorial on the village green.
While the DVS was researching the lives of the 54 men remembered on Datchet’s WWI Memorial, we discovered at least 33 more servicemen with Datchet connections who died during WWI but who aren’t remembered on the Memorial. You can read more about our research here. Following advice from the War Memorials Trust, the DVS created this list of 11 men whose names we believe should be added to the memorial. We liaised with Datchet Parish Council, Datchet British Legion and other village groups, and notified the community by articles in the local press, in The Link magazine, and on Datchet Eye. Last year, over the Remembrance Weekend, the Society also drew attention to these ‘missing’ men with a display on the Green. In all of this, we have received no objections to these 11 names being added and no other names have been put forward.

The names are as follows:

You can read more about these eleven men here: https://www.datchetvillagesociety.org.uk/datchet-in-wwi/the-men-missing-from-datchets-wwi-memorial-and-war-roll/

As part of this DVS WWI research project, Harry Clasper has compiled a revised War Roll which now includes more than 430 names of Datchet men who served during the war.