Albert, a master florist, was born in 1884 but didn’t arrive in Datchet until after the 1911 census. By 1915, he had set up a greengrocer’s and florist’s shop, Martell & Mason, on The Green. (His business partner was probably Charles Henry Martell, who in the 1924 edition of Kelly’s Directory, was listed as a nurseryman at The Myrke.)  Albert also had a listing in Marshall’s Directory 1916, see image, left.

Albert quickly made his mark in the village. The Windsor Express described him as an energetic member of the Working Men’s Club (now the library) and he assisted the various institutions supporting the war effort.

On 24 April 1916, the day before he was called up, 32-year-old Albert married 32-year-old Martha May Barnett, a gamekeeper’s daughter, in Slough, at the Roman Catholic Church of Our Lady Immaculate and St Ethelbert (on Wellington Street). Their wedding certificate indicated that Albert’s late father, William Henry Mason, was a stud groom and May’s father, William Barnett, was a gamekeeper,

May was a lady’s maid at Inniscrone, on the corner of Queen’s Road and Buccleuch Road. Inniscrone was owned by one of the de Paravicini brothers, Henry Farquhar, so May would have been working for his wife, Lady Eva, née Cholmondeley. Lady Eva’s sister, Marcia, had married Henry Farquhar’s brother, Percy John de Paravicini and they were living nearby at Riverside. Both families contributed greatly to the war effort in the village, taking the lead in many local and wartime organisations, whether running them, fundraising or contributing practical help.

On 25 April 1916, having been married for just one day, Albert joined the West Surreys, the 3/4th Queen’s (The Queen’s Royal West Surrey Regiment) as Private 4727.

After his training, in mid-September 1916 he was sent to France as Private 6190 of the 1/22nd (The Queen’s) Battalion, The London Regiment. The 1/22nd was in the 142nd Brigade of the 47th (2nd London) Division. The Division had been engaged in the Battles of the Somme at Flers-Courcelette and the Transloy Ridges. At the beginning of October, plans were being made to attack the Butte de Warlencourt, a strategically-important 60-foot ‘mound’ fortified with machine gun posts and barbed wire. In preparation for the attack, the 47th Division planned to capture the nearby farmstead of Eaucourt L’Abbaye. Albert, the 32-year-old master florist, went into the trenches on the first day of the attack, 1 October 1916, and was killed the following day. On 3 October the Division had secured the farm.

May didn’t have to wait long to hear of Albert’s fate. The Windsor Express reported on 28 October 1916: “Yet another must be added to the roll of those who have made the supreme sacrifice, Private A Mason, who before his enlistment carried on a green grocery and florist’s business in Datchet and was popular with all. He was a most energetic member of the Working Men’s Club and assisted greatly in promoting any scheme towards helping the various institutions in connection with the war. He was called up on April 25th last, and about the middle of September he was sent to France, having been transferred from the West Surreys to the London Regiment (Territorials). He went into the trenches on October 1st and w 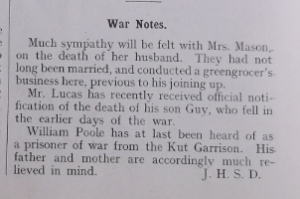 as killed the following day. His wife, for whom the greatest sympathy is felt, has received the notification of his death from the War Office with expressions of regret and sympathy from his Majesty the King.”

Albert Henry Mason has no known grave. He is remembered at Thiepval Memorial, Somme, France. The Commonwealth War Graves Commission website explains: “The Thiepval Memorial, the Memorial to the Missing of the Somme, bears the names of more than 72,000 officers and men of the United Kingdom and South African forces who died in the Somme sector before 20 March 1918 and have no known grave. Over 90 per cent of those commemorated died between July and November 1916.

“On 1 July 1916, supported by a French attack to the south, 13 divisions of Commonwealth forces launched an offensive on a line from north of Gommecourt to Maricourt. Despite a preliminary bombardment lasting seven days, the German defences were barely touched and the attack met unexpectedly fierce resistance. Losses were catastrophic and with only minimal advances on the southern flank, the initial attack was a failure. In the following weeks, huge resources of manpower and equipment were deployed in an attempt to exploit the modest successes of the first day. However, the German Army resisted tenaciously and repeated attacks and counter attacks meant a major battle for every village, copse and farmhouse gained. At the end of September, Thiepval was finally captured. The village had been an original objective of 1 July. Attacks north and east continued throughout October [When Albert was killed] and into November in increasingly difficult weather conditions. The Battle of the Somme finally ended on 18 November with the onset of winter.”
Albert was awarded the British War Medal and Victory Medal.

May Mason’s last known address was 54 First Avenue, Hove, the house of Lady Eva de Paravicini. A 65-year-old May Mason died in Hove in 1947.