Frank Banner, the son of a gardener, was born in late 1889, the ninth child of Edwin and Ann Elizabeth Banner*.

At the time of the 1901 census, the family was still in Spelsbury, living next to All Saints Church. Most of the older children had left home. Walter was working as an under-gardener, possibly alongside his father, and Emily was listed as the housekeeper, no doubt helping her widowed father to look after the younger children, George, Frank, Alfred and Edward.

Emily married Harry Harris, a farm labourer, in 1904 and started a family of her own in Spelsbury. When her father, Edwin, died in 1906, the youngest children appear to have moved in with her and her husband Harry. By 1911, Frank was earning a living for himself, working as a horseman. He was at The Bothy, Clock Tower, Shaw Farm, at Home Park, Windsor. (A bothy is accommodation for farm labourers.)

Marriage and the army

Frank must have signed up soon after war was declared. He was wearing his uniform when he married Florence Agnes Moore (1892-1980) at Old Windsor Parish Church in October 1914. Frank and Florence had a double wedding, with Florence’s sister, Catherine (sometimes Kathleen) Maud Moore, known as Maud, and her fiancé William Blay. The group photo, below, was taken at Laburnum Cottage, (now 61) Albany Road, Old Windsor, the home of Maud and Florence’s mother. (Click on an image to enlarge it.) 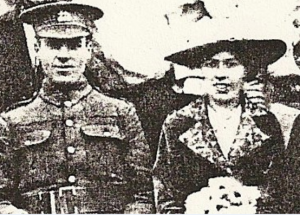 Frank and Florence on their wedding day 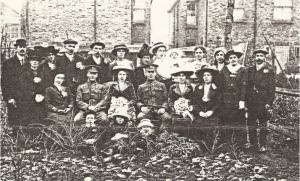 Like Frank, Florence, or ‘Florie’, was from a large family. She was one of at least 12 children born to Walter and Mary Moore. She was born at Combe, in Oxfordshire, where, according to her descendant Keith Moore, her family was working at Blenheim Palace. By 1901 she and her family were living in Datchet at Kinross Cottages on Slough Road. This suggests that her father, Walter, a carter, was working for ‘Jock’ Kinross, the self-styled ‘squire’ of the village, at Riding Court Farm.

Florie’s father, Walter, died in early 1911, age 60, and on the night of the 1911 census, his widow, Mary, was at Albany Road, Old Windsor, with children Walter and Maude. Florie, by then 19, was working as a maid with the Gibbons family at 1 North Villas, New Road, Windsor. 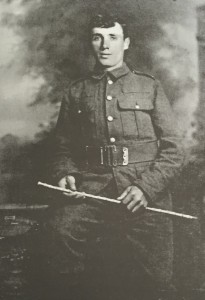 Frank had enlisted in Reading, becoming Private 10885 in D Company, 2nd/5th Battalion of Princess Charlotte of Wales’s Royal Berkshire Regiment. He landed in France on 30 May 1915. His brother-in-law William Blay also joined the same Battalion as Private 10878.

The 5th (Service) Battalion was raised at Reading in August 1914. The troops trained at Shorncliffe, Folkestone and Malplaquet Barracks at Aldershot. They went to France at the end of May and served with 35th Brigade in 12th (Eastern) Division on the Western Front. In June 1915, they took over a section of the front line at Ploegsteert Wood. By mid-July the Divisional front had extended south, reaching to the east of Armentieres; and the 12th Division was holding 7000 yards of the front line. Even in this relatively quiet sector, in July 1915 the Division lost seven officers and 64 men, with another 18 officers and 413 men wounded.

It was while they were at Ploegsteert Wood that 25-year-old Frank was killed. The regimental diaries record his death on 10 August 1915: “No 10885 Pte F. Banner ‘D’ Coy [company] killed by rifle bullet while in the trenches. Battn relieved in the trenches by 7th Norfolk Regt and went into Support. No 11326 L/Corp Hern ‘D’ Coy, No 11359 Pte H. Gower ‘D’ Coy, No 11358 Pte J. Burt ‘D’ coy, No 15693 Pte A. Cook ‘D’ Coy wounded by rifle grenade in the trenches. Pte Gower died of wounds the same day. Casualties during tour in the trenches: Officers/Other Ranks Killed 3, Died of wounds 1, Wounded 6.” (These diaries can be viewed on www.thewardrobe.org.uk ) 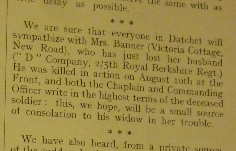 In the September 1915 issue of Datchet Parish Magazine, left, a small article read: “We are sure that everyone in Datchet will sympathise with Mrs Banner (Victoria Cottage, New Road) who has just lost her husband (D Company, 2/5th Royal Berkshire Regt) He was killed in action on August 10th at the Front and both the Chaplain and Commanding Officer write in the highest terms of the deceased soldier; this, we hope, will be a small source of consolation to his widow in her trouble.”

Almost a century later, in 2014, in a special WWI centenary supplement in the Maidenhead Advertiser, there was a short article about Frank. It explained that Frank was killed in action just months after marrying his sweetheart. He was shot through the lungs and died almost immediately. A letter was sent to Florence of Albany Road (Florence’s mother’s address) from Frank’s commanding officer. It read: “I was with him within a second or two of his being shot and know that he was quite unconscious and suffered no pain at all. Everything possible was done at once but it was obvious from the first that he could not live. Your husband was a good soldier and a brave man and gave his life for his country – dying the best of deaths –  on duty. He was universally liked and his comrades will feel his loss acutely, and will not soon forget him. I who saw him constantly and had every opportunity of knowing what a splendid fellow he was. I shall miss him as a friend as well as a soldier of my Company. We shall bury him in the Church Yard where lie many other comrades in arms, and put a cross to mark his grave. I am sending you his personal belongings – including the knife which I gave him and which he always wore. With sincere sympathy in the terrible loss you have sustained. Believe me, yours sincerely, J B Elliot, Captain, 5th Berkshire Regiment.” At least five letters were sent to Florence by Frank’s comrades. They all spoke of their sense of loss and emphasised that Frank had suffered no pain. His descendant, Keith Moore, has copies of these letters. Details were also published in Windlesora 26, 2010, (a Windsor History Group publication.)

Frank was buried at Rifle House Cemetery, Comines-Warneton, Hainaut, Belgium. The cemetery lies in the wood at Ploegsteert and the only access is on foot, via a track. Frank’s grave is plot 4 on row D. His headstone reads: “O true, brave heart, God bless thee wheresoe’er in God’s bright universe thou art to-day”.

Frank is also remembered at Old Windsor Memorial Hall and on the War Memorial on Datchet’s village green. He was awarded the Victory and British medals and 15 Star, and his family received a memorial plaque, pictured below right. 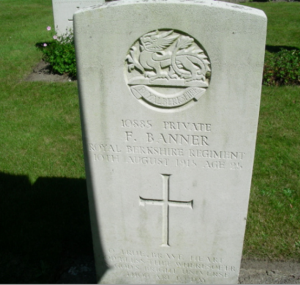 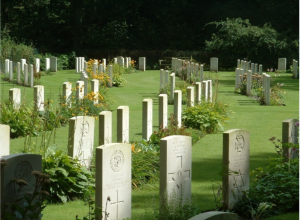 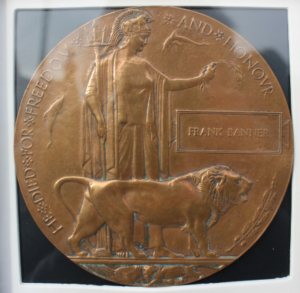 Florence and her son Frank

£102 18s in his will, (see probate record, left, from December 1915). This was probably equivalent to around £4800 today. The address, Laburnum Cottage, Albany Road, was Florie’s mother’s address so it’s likely she was living with her mother after Frank’s death.

Sadly Frank died before he could meet his newborn son. Frank W Banner was born in early 1916.

Sometime around 1920, Florie and young Frank moved to Kingsley, 67 Slough Road. This was not far from where Kinross Cottages had stood, where Florie had lived as a young girl. At the moment, it is something of a mystery how a former housemaid, a widowed young mother, could afford to live there.

The previous occupants of Kingsley were the Stevens family. The Stevens were dairy farmers in the village who moved to Buccleuch Road, to a dairy farm at Sumptermead around 1920. As fellow farmworkers, could they have perhaps known Florie and her family and helped her to secure the house? A chartered accountant by the name of Harold Mead Moore, was boarding with the Stevens in 1911 until at least 1916. Florie’s maiden name was Moore, but as Harold Mead Moore appears to have been the son of Sir Edward Cecil Moore, the surname appears to be a coincidence. (Sir Edward became Lord Mayor of London from 1922-23.)

Florie was listed at Kingsley in Kelly’s Directories during the 1920s. (Datchet’s cemetery records also show that a Jane Thompson was also living there when she died, age 58, in March 1924.) In 1932, Florie’s brother-in-law William Blay, a decorator, was listed there. His wife, Maud, Florie’s sister, died the same year. Could both families have been sharing the house? After Maud’s death, Florie stepped in to help bring up her nieces, Doris and Marjorie Kathleen. Their father, William, died in 1943. (The address on his death certificate was 36 Lodgefield Cottages, Ditton Road.)

Florie eventually moved to Oxford Road in Windsor. When she died, her niece, Marjorie, took care of her estate and Frank’s memorial plaque or ‘dead man’s penny’ was passed down to her son. Florence, her sister, brother-in law, and other members of the Banner, Moore and Blay families are buried at the Parish Church of St Peter and St Andrew in Old Windsor.

With many thanks to Derek Metcalfe and Keith Moore for kindly allowing us to use family photographs and for providing additional information.

*The Commonwealth War Graves Commission lists Frank’s mother as ‘Mary’ Banner, the census and marriage records list her as Ann.