In 1891, the family was at 13 Western Road, Reading but by 1900 they had moved to Datchet. The 1910 Marshall’s Directory lists ‘Slade, A, 3 Kings Villas’ under ‘Trades &c’. In 1911, the family home was a five-roomed Gardener’s Cottage in Leigh House where Alfred was working as a jobbing gardener for the Cholmondeleys, one of the wealthy and influential families in the village. (To read more about Leigh House on the DatchetHistory.org.uk website, click here )

George had already left Datchet before the outbreak of war. We don’t yet know how he was earning a living but it was very possibly connected with horses. He enlisted in Reading and became Lance Corporal 15585 in the 15th (The King’s) Hussars, a cavalry regiment which remained on the Western Front throughout the war. (A Lance Corporal is the lowest-ranking non-commissioned officer in the Army, between private and corporal.) He entered the war in France on 8 June 1915.

From April 1915, the 15th had been part of the 9th Cavalry Brigade, 1st Cavalry Division. They participated in most of the major actions where cavalry were used but they were also used as dismounted troops and served effectively as infantry.

In March 1916, nine months after first going to war, and after the Battles of Frezenberg and Bellewaarde, George Slade married Avis Amelia Brinsden in Wantage, Berkshire. They were both about 30 years old. Avis was from Donington Castle, Wiltshire, and had worked her way up from being a domestic servant at the White House, Twyford, in 1901, to the position of cook at Upton Lodge, Henley-on-Thames in 1911.

Back to the front

The 15th were involved in many battles and engagements including Flers-Courcelette, The First Battle of the Scarpe, The Tank Attack, The Capture of Bourlon Wood, The German Counter Attacks and the Battle of St Quentin.

During The Battle of St. Quentin, 21-23 March 1918, George was taken prisoner of war and held at Ohrdruf. 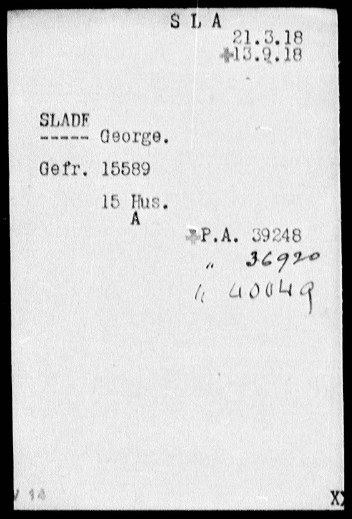 His details were on file with the International Red Cross, right:

(For more information about prisoners of war in Germany, click here. There are photographs of the WWI camp at Ohrdruf on the AuthorPictures.co.uk website, click here)

About six months after being taken prisoner, on 13 September 1918, George died of sickness at Ohrdruf, age 31. Around the same time, his mother, who had heard no news of her son for nearly four months, finally received a postcard from him. Her relief was short-lived. In December 1918, after peace had been declared, Datchet Parish Magazine reported: ‘The past few weeks have brought us definite news of the death of five of our men, Sidney Burfoot, James Pearce, Thomas Hickman, Thomas Arthur Horne and William Newens; [and] of two more who were not living in the parish when they joined up but who were closely connected with us, George Slade (a prisoner) and Frederick Colbourne. Wide spread and deep sympathy has already been felt and expressed throughout the parish for their friends. There seems a special sadness in these losses so near to the time of the “cease-fire”. If only it had been sounded a few weeks earlier! R.I.P.’

George was buried at Ohrdruf prisoners of war cemetery, Thuringia, but in 1922-23 it was decided that the graves of Commonwealth servicemen who had died all over Germany should be brought together into four permanent cemeteries. Niederzwehren was one of those and in the following four years, more than 1,500 graves were brought into the cemetery from 190 burial grounds in Baden, Bavaria, Hanover, Hesse and Saxony. Some 107 graves, dating between 1915-1918, were moved from Ohrdruf, including George’s grave. There are now 1,796 WWI servicemen buried or commemorated in the Commonwealth plot at Niederzwehren.

The epitaph on George’s headstone, chosen by his wife, read ‘greater love hath no man than this’.

Ernest George Slade was awarded the Victory Medal, British Medal and 15 Star. His is the last name on Datchet’s WWI memorial on the village green, listed out of alphabetical order. When the memorial was unveiled in May 1920, there were just 53 names. This is confirmed by the newspaper article on the left, below, which appeared in the Slough Observer, 8 May 1920. George’s name is the 54th on the list and was added at some point after this date. His name is in the correct alphabetical order in the War Roll in St Mary’s Church which is more recent than the memorial on The Green. In 1924, a decision was taken to renovate the lettering on the memorial, see article on the right, from the Slough Observer, 9 August 1924. 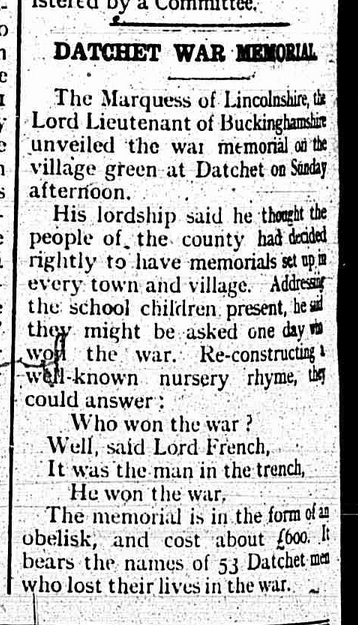 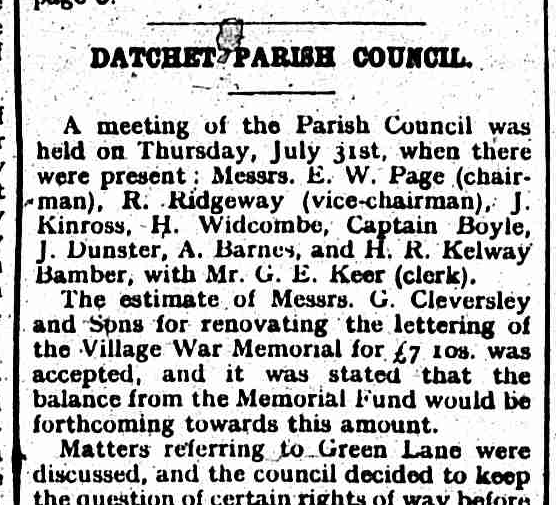