William’s family came from the north-west of England. His grandfather, Christopher Sutton, was a police constable from Lancaster and his grandmother Sarah was born in Ulverston in the Lake District. They lived in Preston and had at least seven children.

William’s father, John Thomas Sutton, was born in 1876. By the age of 15 he was working as a cotton weaver, very possibly in the Lancashire cotton mills. In late 1897, he married another cotton weaver, Jessie Henderson, born 1876 in Carlisle. In 1899 they had a son, William. By 1901 John had become an iron foundry labourer and he was listed on the 1901 census living with Jessie and two-year-old William in Preston, at St Andrew’s Road. By 1911, the family had moved to a house with four rooms in St Cuthbert’s Road and John had become a chauffeur for the Chief of Police in Lancashire, Charles Villiers Ibbetson.

The move to Lawn Cottages

Lawn Cottages, left, were originally built around 1870 by John and Ann Crake, owners of The Lawn, as housing for their staff. After their deaths (John in 1859 and Ann in 1900) their daughter Annie Alice (who married George Knox Morice) and their son Bernard owned the house and estate. It was sold after George’s death in 1928. It is quite possible that the Ibbetsons could have rented one of the cottages for their staff.

See Datchet History for more information about The Lawn.

John had signed up by May 1915. He became Private Sutton M2/077912 in the Military Transport section of the Royal Army Services Corps where his experience with motor vehicles was no doubt invaluable.

In his father’s footsteps

After he left school, William (known as Willie or Will) became a motor fitter. Had he perhaps been inspired by his father’s work with cars?

When he was old enough, William signed up too. He enlisted at the recruiting office in Slough on 6 September 1916 for the duration of the war. He was 17 years old, 5’4” tall, and weighed just over 8st. Initially he joined the Army Reserves.

William’s military records show that on 15 March 1917, aged 18 years and 1 month, he was posted to the Royal Army Services Corps Military Transport Reserve Depot at Grove Park in Lewisham. He was Private Sutton M/301073 of 274 Military Transport Company RASC, part of the 42nd (East Lancashire) Division. The Company remained in the UK as a driver training company.

At hospital in Woolwich

Perhaps his family was relieved that William would not be going to risk his life on the Western Front. But, sadly, just over three months later, at 6.40am on 30 June 1917, William died at the Royal Herbert Hospital in Woolwich, of cerebro-spinal fever (meningitis), age 18 years and 4 months. He had served for 298 days. His relatives were informed the following day and his service form stated, starkly: “Became non-effective by… Death.”

He probably had the best care available at the time. The Royal Herbert Hospital is next to the military barracks in Woolwich. Its design was influenced by Florence Nightingale, who was the aunt of the architect, Captain Douglas Galton of the Royal Engineers. According to the hospital’s website: Florence Nightingale played no small part in the hospital’s design. It was based on the revolutionary pavilion design, each ward being connected to a central corridor to maximise daylight and fresh air intake. Nightingale explained, “All the wards are raised on basements, those at the lower end of the ground are so lofty as to afford excellent accommodation… Every ward has a large end window, commanding beautiful views.” The decorous frontage was designed in Italianate architectural style and the hospital was named after Sidney Herbert, the war secretary. It became a role model for dozens and dozens of hospitals, civilian as well as military. In the belief that peaceful convalescence was essential to recovery, almost half of the 19-acre hilltop site was landscaped into parkland.”

William was buried in Datchet Cemetery. 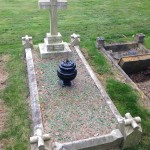 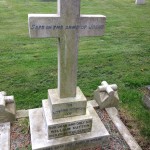 Dedication to William Sutton, a ‘dear and only son’

“The Fallen: Another name has been added, that of William Sutton. Though he did not die on the battlefield, yet he reality [sic] made the supreme sacrifice, at the end of a very brief military career. He only joined last February and had spent most of his time until his death, in and out of hospital, succumbing to an attack of fever. As he is the only son, much sympathy will be felt with his father and mother. An officer and two men came down specially for the funeral to represent his regiment, and no one then present could fail to notice the near presence overhead of four large flying machines, their busy hum being in strange contrast to the solemn stillness everywhere else, as we walk to the grave.” 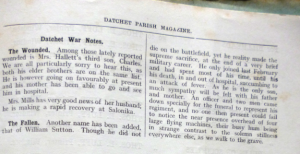 William’s father, John, served until the end of the war and was awarded the Victory and British War Medals. He was listed on the 1918 Absent Voters list at 5 Penn Road so the family perhaps had to vacate their home at Lawn Cottages after Charles Villiers Ibbetson’s death in 1918. He, too, is buried in Datchet Cemetery. Both John and William are both recorded on Datchet’s War Roll and William is remembered on the War Memorial. Their neighbour at Lawn Cottages, Ernest Alfred Clifford, is also remembered on Datchet’s War Memorial.