The Gables, Eton Road (and other addresses in the village)

Margot Eileen Rodgers was born in Windsor on 26 March 1897. Her father Joseph Rodgers, a restaurateur and later a caterer, was born in 1852 in Bourne Lincolnshire. Her mother Annie Georgina, née Smith, was born in 1865 in Marylebone, London. Margot had an older brother, John, born 1890, who was an insurance clerk. He joined the Artists Rifles in WWI and appears on Datchet’s War Roll.

From Windsor to Datchet

In 1901, the family was living at Hendon Lodge, Frances Street, Windsor, with three servants.

They moved to Datchet during the early 1900s, living firstly at Moy Lodge on Slough Road then, by 1911, they had moved to Crumlin Lodge, 38 Slough Road, a large house with 14 rooms. 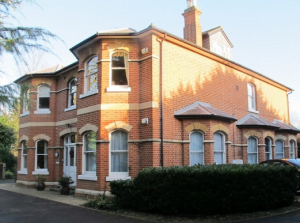 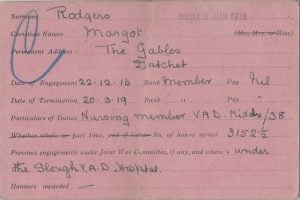 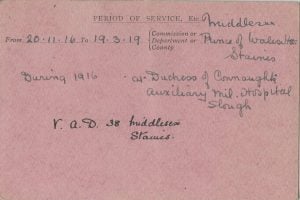 The Red Cross records show that Margot was nursing with the VAD Middx 38, Prince of Wales Hospital, Staines, from 22 December 1916 to 20 March 1919, clocking up 3152.5 hours’ work. In 1916 she had also worked at the Slough VAD hospital (Duchess of Connaught’s Auxiliary Military Hospital)

The Duchess of Connaught Hospital was on the Cliveden Estate. In 1914, one of the most powerful and influential local families, the Astors, had invited the Canadian Red Cross to construct a military hospital over the tennis courts and bowling alley next to Taplow Lodge, on the Cliveden Estate. More than 24,000 soldiers were treated there.

The Prince of Wales Hospital for Officers was on Penton Road in Staines. It was based at Jamnagar House, the country house of the Maharajah Jamsahib of Nawanagar who offered it to the King for use as a hospital for British officers. The Maharaja, better known as the cricketer Prince Ranji, served as a British Army Staff Officer during the war (eventually being promoted to Lieutenant Colonel). He also gave his fleet of cars and lorries to the British Army to help with the war effort. He equipped the hospital and jointly financed it with the the Maharajas of Kashmir and Patiala. By the King’s wish, the Hospital was placed under the control of the War Office, who gave it the name of the Prince of Wales Hospital for Officers.

The Hospital had 38 beds and was staffed by a matron and four sisters, assisted by members of the Middlesex/38 Voluntary Aid Detachment. All members of the nursing staff wore a distinctive badge decorated in blue and red enamel with the Prince of Wales feathers and a narrow gold border.

The Hospital was set in some ten acres of grounds, with well-kept gardens and greenhouses, by the banks of the Thames. Those patients who were well enough were able to spend their time on the river, either fishing or boating. For more information, see The Lost Hospitals of London website

Margot took on an active role in the community. The local newspapers have several reports of her helping to raise funds on Poppy Day with her mother, taking part in the annual Datchet Horticultural Society shows, helping with the teas and ices at Datchet Summer Fete and Bazaar held on the Cricket Field, attending the CEMS (Church of England Men’s Society) whist drive and dances, and providing gifts for the patients at the Princess Alice Home for disabled soldiers and sailors. Her father, Joseph, died in 1924 and, according to later editions of Kelly’s Local Directories, in 1928 and 1932, her mother was living at Holmleigh on London Road, between Cross View and the Radio Research Station (before the M4 was built).

Surgeon-Commander William Perceval Hingston CB RN (1879-1950) was born in Edinburgh in 1879, the son of Colonel C W J Hingston of the Indian Army. In 1907, he had married Myfanwy Dora Marsden, whose family lived at Bryntirion in The Avenue. William and Myfanwy had a son, Perceval Clayton Marsden Hingston, in November 1913. His birth was registered in Marylebone, London. From around 1920, Kelly’s Local Directory lists Surgeon-Commander Hingston at Bryntirion.

Myfanwy was an active member of the Primrose League. The Slough, Eton and Windsor Observer reported in May 1923 that ‘The Junior Branch at Datchet has suffered a great loss in the absence abroad of Mrs Hingston its most energetic hon secretary …/… Lady Mabel Cholmondeley has most kindly allowed the use of a room in her house for the meetings of the junior branch.”  Myfanwy was absent because she had gone to Japan with her husband who was in charge of the RN Establishments in Yokahama. She was killed there during the earthquake in September 1923 when more than 140,000 people lost their lives.

Perceval retired in 1929 to spend more time following his favourite recreational pursuits of hunting and yachting. He married Margot in 1932 and his son, who was 10 years younger than Margot, married in 1939.

After their marriage, Perceval and Margot lived at The Cottage in Montagu Road. Perceval died in Datchet in January 1950. After 1951, Margot disappears from Datchet records. She died in 1975 in Falmouth