How the war changed Datchet

The following extract is taken from Datchet Past written by local historian Janet Kennish. Copies are on sale in the village from The Bridge.

Evacuees arrive in the village

Almost as soon as war was declared, contingency plans for evacuating children from the cities to the country were put into action, even though there was no immediate danger during the months of the ‘phoney war’. By October 1939, two schools from the east end of London with sundry younger brothers and sisters, were scattered among the parishes of Datchet, Colnbook, Horton and Old Windsor. The effects on the village school were immediate; the Datchet children attended in the morning and the evacuees in the afternoon, although soon all were accommodated by using the scout hut, the Mission Hall and the Working Men’s Club as classrooms.

The cultural collision must have been tremendous, and before long the evacuees were being blamed for all the mischief in the village. Several did admit to damaging trees on the riverside and throwing the six benches there into the river, but it was pointed out that before they arrived the local children were hardly considered to be angels.

After the Battle of London in September 1940, more evacuees, mostly mothers and young children, poured into the district and the need for accommodation became desperate as the population increased by over 40 per cent. But safety was not guaranteed here either, and air-raid shelters were being built in many homes as well as at the school.

Slough’s factories became enemy targets and the first casualty in the village was Jimmy Hill, of the shop on the Common, who was killed in an explosion at the High Duty Alloys factory in Slough. His brother-in-law was killed in the same incident which was suspected to be due to sabotage. Even nearer was Langley airfield and the Hawker Aircraft Company, where 15,000 Hurricanes were produced during the war, and where many people from Datchet were employed.

Smouldering drums of foul smelling oily rags were positioned on the road towards Langley as part of a protective dense smoke screen around the Hawker factory. Also as protection for Langley there was an anti-aircraft gun post situated on the Guards’ polo ground in Horton Road, where the old pavilion became the officers’ mess.

The Royal Artillery requisitioned both Churchmead House and Holmwood House in Slough Road, from where they conducted the anti-aircraft operations. One night a bomb fell on this gun post, severing communications between the control centres, and two motorbike despatch riders sped in opposite directions along Horton Road in the dark with vital messages. Both were following the white line in the middle of the road and both were killed in a head-on collision.

Other bombs did fall on Datchet but there were no further fatalities except a large number of chickens at Riding Court where the bomb made a great crater behind the house. To the great excitement of the village, especially the children, a German plane which had been shot down in the Great Park was displayed outside the school and could be clambered over at the cost of one penny.

At Ditton Park, top-secret work continued to produce compasses for all three services, especially the new remote transmission gyro compass, and the staff there increased to over one thousand. Even more significant was the development of radar at the Radio Research Station in the grounds of Ditton Park, later to become the Appleton Laboratories. Radar was first demonstrated in 1935 by Watson Watt who lived in Datchet, and it was realised how vital a role it could play, so that by 1945 radar was described as ‘the most decisive weapon of the war’.

From the beginning of this war, the population at home was acutely aware of the threat of invasion and determined to fight with anything that might come to hand. Early recruitment to the Local Defence Volunteers exceeded all expectations and the War Ministry had to organise and equip them much more seriously that they had intended, soon changing their name to the Home Guard, although they are immortalised as ‘Dad’s Army’.

Volunteers from Wraysbury and Horton were combined with those from Datchet where the platoon was based, at first under Captain Wilfred Good, and then Captain Hathaway. Their official headquarters was at Churchmead House, though the Royal Stag was their unofficial base and Datchet House’s stables were also used for storage. Their main duties were to guard vital local points; the Victoria and Albert bridges, which were used for troop and tank movements, and the water pumping station in Pocock’s Lane. There was also a Special Section of the Home Guard patrolling the Thames between Old Windsor and Romney locks, manned by those who owned their own boats, including Mr Killick of the Manor House. 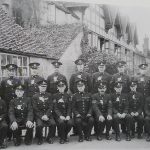 The Special Police outside Cleversley’s workshop, 1937 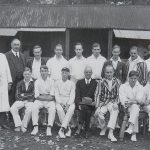 Datchet Cricket Team 1930. Captain Killick is in the front row, wearing a striped blazer; on his right is Mr Soden, with the hat. E W Page is on the far right and Mr Keer, parish clerk, is next to him

Local fund-raising was often for specific and tangible targets, the Spitfire Fund particularly catching the imagination of the children, one of whom made a model plane to surmount the school’s collecting box, which raised the huge sum of £50.

Children’s activity was also harnessed in the autumn of 1942, when they gathered five hundredweight of conkers to be sold for the production of glucose, and many senior boys and girls were sent to help with crucial agricultural work.

For a time, traders from Billingsgate fish market came out to Datchet, a relatively safe place with easy access, where their vans occupied the North Green and Slough Road. The problem of feeding the swelling community at a time when mothers were employed in war work all day led to the first provision of school meals at the scout hut. At the same time, infants’ nutrition was improved by free cod-liver oil and orange juice dispensed from the Working Men’s Club.

When peace was declared there were immediate spontaneous celebrations, the church bells ringing after the broadcast was heard, and crowds gathering on the Green in the evening around an enormous bonfire outside the school. On the following days there was a torchlight procession and dancing on the Green, the village was decorated, buildings floodlit, and Victory tea parties were given for the children. A special service was held on the next Sunday when the church was filled to capacity, and as people came out they cheered the King and Queen who were just then driving past on their way to the service at St Paul’s in London.

The total of men killed on active duty was 26, just half the number who fell in the First World War, but many families had to wait for the safe return of prisoners from the Far East. Fifteen did return but the Lewin family made the sad discovery that their son John, from whom they had recently received postcards, had in fact died two years earlier from cholera. The urge to commemorate those killed in this war was not felt as it had been after 1918 and in common with most other places no new memorial was erected. Although plans were being discussed in 1947 to record the deaths on the obelisk on the Green, it was not until 1990 that a plaque was placed on its base by the British Legion.

By the end of the war, significant social changes had taken place in the village. Everybody, regardless of wealth or class, had been affected by extreme shortages and privations; those with cars were forbidden to waste petrol and those with large houses had them filled with evacuees or troops. Almost all adults were involved in paid or voluntary work, and the supply of servants dried up; those who had depended on them had to learn to cook for themselves. The ‘wartime spirit’ prevailed everywhere, while in this community patriotic duty also forced change which began to blur the old distinctions between traditional social classes.