Violet Evans, nee Mooney, was born in early 1893 at Netley, a coastal village in Hampshire. Her parents were Walter Thomas Mooney, a domestic butler from Kentish Town, London, and Mary Jane Painter from Barrington, Somerset, who had married in 1886.

The 1901 census shows eight-year-old Violet living with her parents and three older sisters, Edith 14, Amy 12 and Lilian 9, (all born in Longford, Somerset) at Mercury View, Hound, South Stoneham (near Southampton).

Sometime between 1905 and 1910, Walter and Mary Mooney moved to Jasmine Villa, 1 Montagu Road, where they lived for the rest of their lives. Did Walter’s work as a butler bring them here? The 1911 census shows that they were living in the seven-roomed Jasmine Villa with two of their daughters, 22-year-old Amy, a dressmaker, and 18 year-old Violet. No occupation is recorded for Violet. The family also had a boarder, John Tennessee Hawkins, a 26-year-old assistant schoolmaster from Chesham, Bucks. In 1911, their other daughters were working away from home: 19-year-old Lilian was boarding in Worthing and working as the manageress of a dyers and cleaner’s shop; Edith was working as a nurse at Lewisham Union Infirmary.

The 1910 edition of Marshall’s Local Directory lists the Mooneys in Montagu Road and also a Nurse Mooney, at Rose Cottage. Could this have been Violet’s sister, Edith? Rose Cottage, near the chemist’s shop on The Green, might have been a very convenient address for a nurse. (There are no clues from searching lists of previous residents at Rose Cottage. No-one was living there in 1911 and previously Caroline Cordery had been living there with her niece Frances Saunders. After Caroline’s death in 1902, Frances continued to live there and was also recorded at the address in 1910.)

The sisters get married

We know something of Amy and Lilian’s husbands but, as yet, very little of Violet’s or Edith’s.

Amy’s husband, Bertram Watts (born 1887 in Brentford, Middlesex) lived at Datchet Cottage, Southlea Road (1911 census) with his widowed mother, Mary, brother Sidney and four sisters. Bertram was a boilermaker and Sidney a motor fitter. Three of his sisters were dressmakers, like Amy. Bertram and Sidney served in WWI and are listed on Datchet’s War Roll. Sidney served aboard HMS Ganges (CMM) and Bertram in the 15th Hampshire Regiment as Sgt 204927. Bertram was wounded in late 1918, according to a report in the Windsor & Eton Express on 12 October 1918.

Lilian’s husband, Percival Alonso Bowerman Bartlett (born 1886 in Somerset)  also served in WWI. He was a Corporal in the Royal Engineers, Regimental Number 78925. Percival is also listed on Datchet’s War Roll. In the Absent Voters’ list in 1918, his address is given as Rosedene, Datchet. He died in 1941 in South Africa in Sandhurst, Johannesburg.

Who was William Thomas Evans?

William Thomas Evans is something of a mystery and it may be worth our purchasing a copy of his marriage certificate to Violet for more information. (If any readers have any information, DVS would be delighted to know.) Elsewhere in the village, there was a Miss M A Evans living at Branxholm, 39 Montagu Road, listed in Kelly’s Local Directories from 1915-1928. Was William related to her? There was also a William P Evans who is recorded on Datchet’s Roll of Honour but he did not marry until September 1918 and, as far as we can tell, there were no other Williams in his family, so he has been discounted.

During the war, Violet and her father, Walter, both took on voluntary work at the VAD Hospital in Langley (Bucks 4) based at St Bernard’s Convent House.

Violet’s Red Cross cards show that she registered as Miss Violet Mooney and later became Mrs Evans. Her address was given as Montagu Road, Datchet, and she volunteered from November 1914 to June 1916 at Slough VAD Hospital, Bucks 4, Langley. Her rank at engagement and termination was VAD Nurse. Her duties were in the kitchen where she worked for 2000 hours. 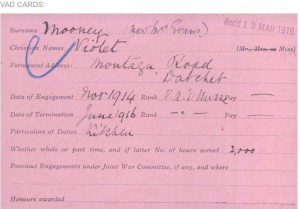 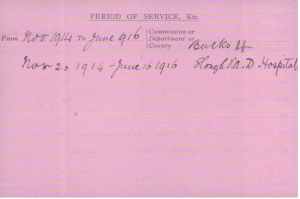 Walter’s records show the same address. He volunteered from November 1914 to August 1915, also at Slough VAD Hospital, Bucks 4, Langley. His rank was given as orderly and he worked at nights for 258 hours over the nine months. There is some additional information which reads ‘orderly work at night in four-hour watches and an occasional Sunday duty at VAD Hospital, Slough. 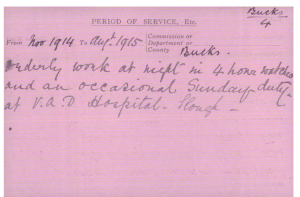 Local newspaper reports show that Walter was an active sportsman, regularly playing cricket for Datchet and sometimes Ditton Park teams. In 1924, age 61, he ran in the over 45s ‘Hundred Yards Veterans Handicap’ race at the village fete and came first. In 1925, he was at the Datchet Cricket Club AGM.

It is thought that Violet and William Evans had a daughter, Brenda, in the third quarter of 1926. A birth was registered in Eton District with a father named Evans and mother Mooney. (There are other children with parents Evans and Mooney but this is the only one registered in Eton. Without knowing where Violet and William moved to after Datchet, we cannot say whether any of these other children were theirs.)

Parents Walter and Mary Mooney stayed in Datchet for the rest of their lives. Mary died in 1934, age 74, and Walter in 1947, age 84. When Walter died, probate was granted to his son-in-law, Bertram Watts, a Managing Director, Amy’s husband. Sadly, Amy died in 1947, the same year as her father. Her address was given in probate records as St Elmo, London Road, Ashford.

We have no further information about Violet, Edith and Lilian. If you do, please get in touch.