Emily was Canadian, born in Newfoundland in 1850. She was one of at least five children born to Sir Bryan Robinson, a prominent lawyer and judge, and Selina Brooking.

Emily married an English priest, Joseph James Curling (1844-1906), in 1876 at the Cathedral in St John’s, Newfoundland. He was a missionary, working in the Bay of Islands.

Joseph had been educated at Harrow and the Royal Military Academy in Woolwich, then served as a lieutenant in the Royal Engineers, becoming the aide-de-camp to the Governor of Bermuda in 1869. In 1873 he resigned his commission and became a missionary in Newfoundland. He was ordained deacon in 1873 and priest a year later.

In 1886, when the physical demands of his ministry began to affect Joseph’s health, the family returned to England where, aged 42, Joseph enrolled at Oriel College, Oxford, to study theology. Their only daughter, Selina, was born Oxford in 1887.

In 1891, Joseph and Emily returned to St John’s in Newfoundland, where Joseph became principal of Queen’s College which prepared students for the ministry. In 1892 they returned to England and lived in Hamble, Hampshire, where Joseph was the vicar for eight years.

At some point after 1901, the family moved to Datchet and lived at Denholme on Horton Road.

Joseph died in Datchet in November 1906, age 62, leaving Emily a widow at the age of 56. The Slough, Eton and Windsor Observer reported Joseph’s death in January 1907.

War was declared on 28 July 1914. A month later, on 29 August, the Slough, Eton & Windsor Observer announced that a War Distress Committee had been formed in Datchet with Mr Percy de Paravicini as chairman. There was a strong executive committee and sewing classes were in full swing. “Mr Mocatta is holding classes twice as week, as also is Mrs Emily Curling with her Voluntary Aid Detachment”, it reported.

Some Voluntary Aid Detachments existed before WWI. In 1909 the War Office had issued the Scheme for the Organisation of Voluntary Aid. Under this scheme, VADs were given the role supporting the Territorial Forces Medical Service in the event of war.

From November 1914 to February 1919, Emily was a Commandant of Bucks 4 VAD. A commandant was usually in charge of the hospital except for the medical and nursing services, but Emily’s record cards, below, list the particulars of her duties as ‘helping in nursing’. The Red Cross records show that Emily volunteered for about 280 hours in 1914 and 1915, then worked at Datchet War Hospital Depot between 1915-1917. Her daughter, Selina, was also a volunteer. 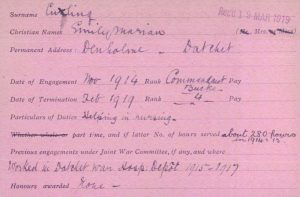 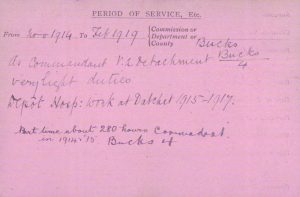 The Slough, Eton and Windsor Observer confirms that Emily and her daughter, Selina, were working at the Voluntary Aid Hospital in Slough. (For the first year of the war, the hospital was at St Bernard’s Convent. It then moved to Birchfield in Langley for the remainder of the war.)

Packing for Prisoners of War

From December 1917 to December 1918, Emily also undertook packing for the Prisoner of War department, presumably packing parcels to send to Prisoners of War. The Red Cross website explains: In WWI, prisoners of war were protected from being killed, injured, or tortured by the first Geneva Conventions of 1864 and 1906. The conventions also said they should be treated ‘humanely’ but it did not say anything about feeding them well and so many prisoners were close to starving and the food they were given may not have been appropriate or enjoyable. The VADs were able to establish a food parcel service to help with this problem. 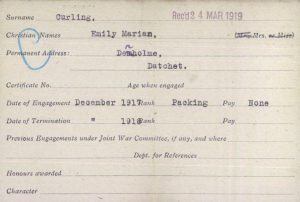 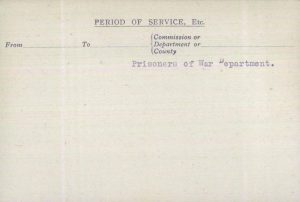 The VAD Hospitals relied heavily on donations and loans. To help encourage people to donate, the Slough, Eton and Windsor Observer regularly listed gifts which had been received. These lists show that gifts from Emily and Selina were frequent and included a wide variety of items: dressing jackets, a bowl of bulbs, fruit and vegetables, cakes, furniture, papers, clothes and shoes, money, even hammocks. Selina sometimes loaned the use of her car. The two women helped with fundraising too. For instance, Emily collected money from friends to provide £6.6s for new instruments for the operating theatre.

The Crucifix on London Road 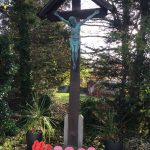 The Crucifix on London Road, Datchet’s first war memorial, was donated by the Curling family in May 1919. The Windsor & Eton Express reported: ‘On Empire Day a large congregation, including many soldiers returned from the front, attended the Dedication of the Crucifix. The procession started from the church with George Hunt carrying the processional cross, followed by the choir, the Vicar and the Bishop of Buckinghamshire. In his address the Bishop said that the memorial was intended as a wayside shrine which would be a familiar sight to those who had served in France but was little known in England.’

From Datchet to Kensington

Emily and her daughter, Selina, stayed in Datchet for a few years after the war. They were still at Denholme in 1920 but by 1922, Doctor Glegg was living there. Selina continued to practise in London as a chartered masseuse, a skill she had learned during the war. It would seem that the mother and daughter continued to live together. Emily died in 1942 at St Mary’s Hospital, Paddington. Her address was listed as Hornton Street, Kensington, where she lived with Selina.