The Hall, The Green

The girls’ paternal grandfather, who had died before they were born, was also William Langton. He grew up in Ormskirk, Liverpool and Switzerland and was a merchant and banker associated with the establishment of some of Manchester’s prominent institutions including the Athenaeum. He had started out as a cashier at Benjamin Heywood & Co, a Manchester bank. Following the death of the founders of the bank, Benjamin Heywood junior had been left in sole control but his ill-health meant that responsibility increasingly fell on William to build up the bank’s business. During this time, William developed a close friendship with the Heywood family. William senior named one of his sons William Heywood after the Heywood banking family, and two of his daughters married Heywood’s sons. In later life, William became the managing director of the Manchester & Salford Bank, a forerunner of the Royal Bank of Scotland.

William, junior, grew up at Litchford Hall, Blackley, Lancashire. The family later moved to Docklands House, Ingatestone, Essex. The 1881 census shows William and his wife-to-be, Florence, at Docklands with his parents, one of his sisters, two more visitors and four domestic servants. William, then 37 years old, was working as a Commercial Clerk in the East India Trade. William and Florence married later that year in Kensington, London, a few months before the death of William Langton, senior.

William and Florence had two daughters: Frances Margaret in 1882 and Mary in 1885. Both were born in Kensington. In the next census, in 1891, William and Florence were at 20 Argyll Road, Kensington, with two visitors and four domestic servants, but the girls were staying with their uncle, Henry Currer Langton, and grandmother, Margaret, at Docklands House.

Frances and Mary haven’t yet been found in the 1901 or 1911 census records. In 1901, there were just two domestic servants at the house in Argyll Road. If the Langtons were still living there, they were away on the night of the census. Perhaps the girls were away at school?

The family were at The Hall, Datchet around 1910 and, according to entries in local directories, they stayed here for at least 10 years. The Hall no longer exists but it used to face onto the Green where Hall Place is now.

In the 1911 census, William, 67, a retired Company Secretary, and Florence, 63, were at The Hall with four servants and William’s sister, Anna Margaret Heywood. She had married Charles James Heywood, one of the Heywood family of bankers. Frances and Mary weren’t with them.

The Langtons often appeared in the local newspapers although Frances and Mary were both referred to simply as ‘Miss Langton’ so it’s impossible to tell one from the other. In June 1910 Mrs and ‘Miss Langton’ joined the Empire Day Celebrations in Datchet. In 1911 ‘Miss Langton’ was singing to raise funds for the Working Men’s Club (now the library). Like many families, during the war, the Langtons donated gifts to the Voluntary Aid Detachment VAD Hospital in Slough. In June 1915 ‘Miss Langton’ donated vegetables and use of her motor car. In April 1915, the whole family attended Lord Desborough’s inspection of the 1st Battalion of the South Bucks Volunteer Defence Force in the grounds of Churchmead House.

Nursing with the Red Cross

Mary and Frances appear to have been inseparable. Their Red Cross records are almost identical. Both volunteered with the Voluntary Aid Detachment (Bucks 4) from 20 November 1914 to 11 December 1918. Both were originally attached to the Slough VAD Hospital, Langley, as a members of the nursing staff. They started as ward probationers from November 1914 to April 1916. Mary clocked up 2268 hours part-time, Frances clocked up 2388.

The women then became full-time ‘Ambulancieres’ in France with the Anglo-French Hospital Committee and French Red Cross between July 1916 and December 1918. As the name suggests, an Ambulanciere, usually worked with an Ambulance Company, transporting and caring for wounded soldiers. 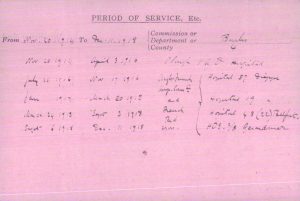 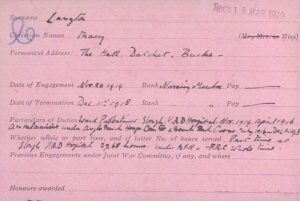 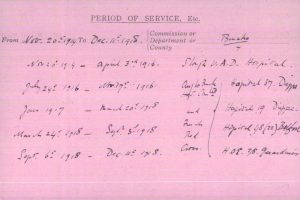 Both Mary and Frances were awarded Victory and British War medals.

It’s not yet known what happened to the women after the war. Their mother died sometime between April and June 1920. Her death was registered in Eton which suggests their parents were still in the village when names were being collected for the Datchet War Roll. The family’s last listing in Kelly’s Local Directory for Datchet was in 1920 so it’s thought that they left the village sometime after their mother’s death. Their father died in 1921. His death was registered in Marylebone. Probate details show his address as 2 Kent Terrace, Regents Park, with effects of £36,423. Probate was granted to his daughters.

Neither Mary nor Frances married and it seems probable that they continued to live together. They seem to have returned to Kensington where they grew up. Both are buried in Brompton Cemetery. Mary died on 26 December 1958. Frances died on 18 January 1963. Their probate records show they were both living at the same address, 119 Old Church Street, Kensington, London. There are other Langtons in Brompton Cemetery including their uncle Henry Currer Langton and aunt Marian Cecily Langton.