Our plaque commemorates John Marcus de Paravicini, who was killed during the Battle of Cambrai 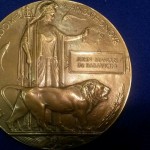 Bronze Memorial Plaques were sent to the families of all men and women who died during war service. They are about five inches in diameter and, as they look like a large medal or coin, were often called the ‘Dead Man’s Penny’. The Datchet Village Society purchased one of these plaques for the village and for our Datchet in WWI project. It is hoped that the DVS can arrange for this plaque to be displayed permanently somewhere in Datchet, or at least at appropriate events and meetings.

Our plaque commemorates John Marcus de Paravicini, who was killed during the Battle of Cambrai in November 1916. It is important to Datchet’s history because the Paravicini family contributed greatly to the war effort in the village. They took the lead in very many local and wartime organisations, whether running them, fundraising or contributing practical help. Percy John de Paravicini commanded the Datchet Volunteer Platoon, was chairman of the Committee of the Edward VII Hospital in Windsor and the Datchet War Distress Committee, and treasurer to the War Hospital Supply Depot, as well as being a founder member of Datchet Golf Club and chairman of the Working Men’s Club Trustees. Apart from collecting eggs for wounded soldiers, Lady Marcia worked on most days either at the Windsor War Work Depot or as a nurse at the Edward VII Hospital.

Youngest major in the British army

John Marcus de Paravicini volunteered as soon as the war began and was entered on a waiting list for an officer’s commission in the King’s Royal Rifle Corps, eventually being commissioned into the 11th Battalion on 13 October 1914. By the age of 21 he had risen to second-in-command and was said to be the youngest Major in the British Army. His battalion landed in Boulogne in July 1915. During 1916, it was engaged in the battles of Mount Sorrel, Delville Wood, Guillemont, Flers-Courcelette, Morval, and Le Transloy. In 1917, it was in action during the German retreat to the Hindenburg Line, the battles of Langemarck, Menin Road Ridge, Polygon Wood and the Cambrai Operations, where John Marcus was reported missing in November 1917.

At the Battle of Cambrai, the Allies had planned a sudden attack on 20 November 1917 at a point where the enemy did not expect it and, unusually, with no preliminary artillery bombardment. Tanks broke through the German wire and the infantry followed under the cover of smoke, making remarkable advances. After two days of fighting, a halt was called for rest and reorganisation but this gave the Germans time to reinforce. From 23-28 November, the fighting was concentrated around Bourlon Wood and by 29 November, the Germans were ready to launch a fierce counter attack. During the fighting of the next five days, much of the ground gained by the Allies was lost.

Datchet Parish Magazine, 3 January 1918, reported “Lieut. Charles de Paravicini is now a prisoner of war. A report had previously come through that he and his brother, Major John de Paravicini, were missing. So far no definite news has been received about the last named. Much sympathy has been expressed with our Churchwarden [Percy John de Paravicini] and Lady Marcia de Paravicini in their time of anxiety.” It wasn’t until eight months later that his family received confirmation John Marcus was presumed killed in action. Datchet Parish Magazine, 4 August 1918, reported that he was “missing after the fighting in Bourlon Wood on November 30th, 1916, and no very definite news has ever been heard of him, but he must now be included among those whom we shall not see again here. A fine man, a good comrade, and a brave soldier, he has been missed by very many, and deep sympathy has already been widely expressed for Mr Percy and Lady Marcia de Paravicini in their long-drawn-out anxiety and their now certain loss.”

In Blood and Thunder: The Boys of Eton College and the First World War (The History Press, 2014), historian Alexandra Churchill tells the story of the Great War through an extraordinary band of brothers from Eton, following them as they stepped out of the classroom and onto the battlefield. The author records John Marcus de Paravicini’s last hours. His battalion had been ordered to relieve another battalion on the Front Line as darkness fell on 29 November. They were woken the next morning by a brutal German counter-attack thundering towards them.

“Marcus fled his battalion headquarters on his hands and knees with nothing but a revolver for protection. One of his riflemen followed close behind. They had made it some 20 yards when a low-flying enemy aeroplane came bearing down on them and opened fire. The rifleman screamed out in pain as he was hit in the leg. He looked up just in time to see Marcus’ revolver shot out of his hand. He watched as the young major scrambled on a few more yards and threw himself into a shell hole. The King’s Royal Rifles had been overrun”

Even after the end of the war, his family were still hoping for news but John Marcus was never seen nor heard of again. He was awarded the Victory Medal, British War Medal and the 15 Star and is remembered on Panel 9 at Cambrai Memorial, Louverval, Northern France, which commemorates more than 7,000 servicemen of the United Kingdom and South Africa who died in the Battle of Cambrai in November and December 1917 and whose graves are not known. He is also remembered, along with his father, on a memorial plaque in St Mary’s Church, Datchet.

To read more about John Marcus and his family, please click here.