After finishing school, 18-year-old Mairi Lambert Gooden-Chisholm and her motorcycling friend, Elsie Knocker, left for the Western Front to work as ambulance drivers, helping to look after the wounded. They became known as the ‘two women of Pervyse’.

Mairi was born on 26 February 1896 in Datchet, into a rich merchant family. She was the second child of Roderick Gooden-Chisholm, chief of clan Chisholm, and his wife, Margaret Fraser, daughter of Colonel William Fraser of Colbokie and Guisachan. Kelly’s Local Directory 1895 records the family at Manor Cottage on The Green. Their first child, a boy named Uailean Hamish McUistean was born in Datchet in 1894 but by 1906, when their third child, Lucy Margaret, was born, the family had moved to Dorset.

In April 1896, the Slough Eton and Windsor Observer records Mr and Mrs Gooden-Chisholm attending an evening of entertainment to raise funds for Datchet Fire Brigade along with the Paravicinis and other well-to-do families, reporting that ‘Messrs Chisholm and Knox caused much amusement with their humorous recitations’. It is said that, on one occasion, King Edward VII visited the family with his mistress Mrs Keppel to play cards, (which, if they were spotted, might have caused a stir in The Royal Stag opposite).

The privately-educated Mairi was something of a tomboy. When her father gave her a Douglas motorcycle in her late teens, she joined the Gypsy Motorbike Club, taking part in trials and rallies around Hampshire and Dorset. This led to a keen, lifelong interest in motor vehicles. She met Elsie Knocker, a divorcee and single mother, 11 years her senior, through their joint interest in motorbikes.

It was their love of adventure which drew the women to the Western Front, despite the danger. When war was declared in 1914, Mairi wanted to go with Elsie to London to volunteer for the war effort. At first, her mother refused to let her go but her father was more supportive; Mairi wrapped up her belongings in a bandana on the back of her motorbike and set off. 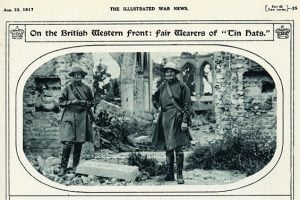 Elsie had some first-aid training but Mairi had none. In London, she volunteered as a dispatch rider for the Women’s Emergency Corps. Her motoring skills drew the attention of Hector Munro, founder of the volunteer Flying Ambulance Column (FAC) and, in September 1914, they left with the FAC for the war zone in Belgium. For the first few weeks on the Yser front, they collected casualties to transport back to base hospitals. Mairi and Elsie were sometimes allowed by the enemy to crawl into no-man’s land and retrieve the bodies of English airmen.

On the front line

Elsie and Mairi persuaded the Belgian authorities to allow them to set up a first aid post on the front line at Pervyse, first in a cellar, then in a bombed-out house. They were three miles closer to the front line than any of the other ambulance posts. Their living conditions were terrible, with no running water, hardly any money, and an irregular supply of food, depending on what people sent or brought for them. Early on, they found themselves caught up in hand-to-hand combat, narrowly escaping a bayonet charge. The sound of blades being plunged into ‘innards’ was said to haunt Mairi for years afterwards.

There was a stream of wounded soldiers, day and night. They had a surgery and also treated a variety of wounds and ailments including boils, sores, foot troubles and VD. At night, Mairi would drive with the wounded from the front line to the base hospital in their Wolseley ambulance, donated by the people of Sutton Coldfield. Between 1915 and 1917, she transported 1500 casualties. 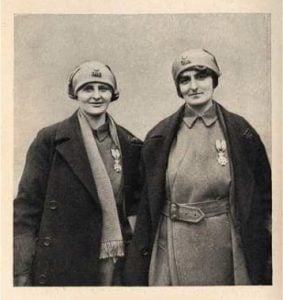 Mairi and Elsie were the only women permitted to work at the front line on the entire western front. They were appointed Chevalier of the Order of Leopold II in January 1915 with a later investiture by King Albert of the Belgians himself. By 1917 their work was acknowledged in Britain, too. In October 1917, both women were awarded the Military Medal. Mairi was also later decorated with the award of the 1914 Star, the Order of Queen Elizabeth of Belgium and created Officer of the Most Venerable Oder of the Hospital of St John of Jerusalem.

On 17 March 1918, they were caught in a gas attack and had to be invalided home. Mairi returned to Pervyse for a brief spell but was gassed a second time while on the field telephone. She was 22 years old.

After returning home, the two ‘women of Pervyse’ went their separate ways. Mairi’s interest in motor vehicles initially took her into the London motor trade (she was driving a Sunbeam sports car well into her eighties) but her health had been affected by the war. She left London about 1921, moving to the Highlands where she stayed to run a poultry farm with her lifelong friend, May Davidson. From the 1930s, they lived with a group of women friends in Argyll.

Unlike Elsie, Mairi never published an account of her war years but, after being included in the Imperial War Museum exhibition ‘Women at war, 1914–18’ in 1977 and the BBC series Yesterday’s Witness, she left her diaries and a brief memoir to the museum. She died death on 22 August 1981 at Perth Hospital.