Holmcroft then Horncliffe in Montagu Road, and Woodside, Slough Road,

Emily Severne Ward was born in Whetstone, North Finchley, on 22 August 1879. Her parents were Harry Brocks Ward, who worked at the Stock Exchange, and Isabella Maria Beagin, who was born in India, the daughter of an Army Captain. Emily was the youngest of four children, two boys and two girls. She grew up in Finchley and appeared with her family there in the 1881, 1891 and 1901 census.

In August 1901, in Finchley, 21-year-old Emily married Henry Edmund Batty. (He was one of about nine children born to William Edmund Batty, a vicar at St John’s, Fulham, and Frances Beatrice Jebb.) At the time of their marriage, Henry, 29, was working as an insurance official. He later worked at the Stock Exchange.

It was Emily’s parents, Harry and Isabella, who moved to Datchet first. They had homes in both London and Datchet. In Kelly’s Directories 1903 and 1907, a Mrs Ward was living at 5 The Avenue. (No first initial is given so we can’t be sure it was Emily’s mother but, in the 1910 Directory, a Mrs B Ward was at Holmcroft, 59 Montagu Road, and no longer at The Avenue. The family was also at this address in the 1911 census.)

Emily and her mother joined in the Empire Day celebrations in the village in 1910. An account of the event was reported in the Slough Observer.

In April 1911, on the night of the census, Emily and her husband Henry were at Holmcroft, with her brother, John Ward, another visitor, and three servants. No one was listed as ‘head of the household’; Emily, Henry and John were described as daughter, son-in-law, and son, indicating the absence of a parent. In the same census, Emily’s father, Harry Brocks Ward, was at 18 Ashley Gardens; a very large flat in Westminster. Her mother, Isabella, hasn’t been found in the 1911 census. She was possibly unwell and receiving care somewhere; she died a few months later and her death was registered in Eton. (Emily’s father died in London in 1921.)

By 1914 and the outbreak of war, Emily and Henry were living at Hornecliffe, 40 Montagu Road. Henry joined the Army Ordnance Depot and left for France in November 1915. He rose from the rank of Lieutenant to Captain (c1916) and, after the war, was awarded the British War Medal, Victory Medal and 1914-15 Star.

Emily volunteered to serve with a local Voluntary Aid Detachment (Bucks 4 VAD) from December 1914 to February 1919. She was posted to Slough VAD Hospital, Langley, where she started as a nurse and progressed to staff nurse, doing general ward duties. The Red Cross record cards, below, show that she worked full-time for 26 months. 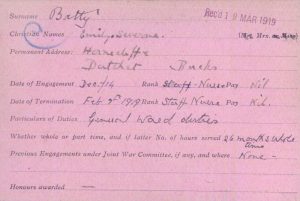 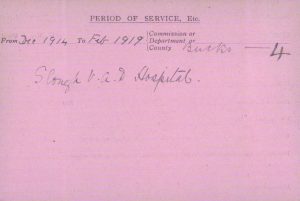 Villagers sprang into action to support the war effort. War was declared on 28 July 1914 and a month later, the Slough, Eton and Windsor Observer was reporting that a War Distress Committee had been set up in Datchet. Emily was helping to organise an additional Mothers’ Class to sew garments for the Red Cross to distribute to the wounded. By 5 September, the paper reported that some 400 garments had been collected in the billiard room at Mrs Mocatta’s home, Leyfield, ready to send away. 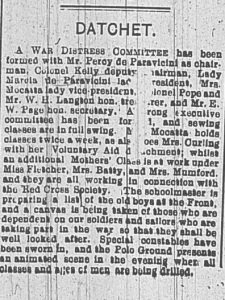 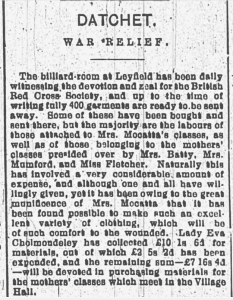 Like many people in the village, the Battys were regular donors to the Slough VAD hospital. Their gifts were recorded in the local paper. Even after peace was declared, the local VAD hospital was still nursing wounded soldiers. An article from the Observer in January 1919, listing donations, gives an idea of what that first Christmas after the war must have been like for the soldiers, with turkey and crackers, Christmas cakes, jigsaw puzzles and gramophone records. 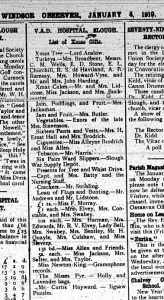 Emily and her husband stayed in Datchet. Their names crop up frequently in the local press. In 1920, the Observer reported that one of her servants had stolen a ring from Emily but that it had been found and returned.

The Battys were busy with village life, particularly raising funds for the church or the Society for the Propagation of the Gospel. In 1923, the Observer reported that Emily was organising a church bazaar, and a sale of work in aid of the SPG. Henry had two brothers in the church, Reverend Arthur Montagu Batty, Rector of Chingford, and Reverend Basil Staunton Batty, formerly vicar of Medmenham and later Bolsover, then Christ Church, Mayfair. Both occasionally attended village events. In 1925 Arthur was at the opening of a Sale of Work at Horncliffe in aid of the SPG.

The couple were often at village events. In 1925 they were at the Datchet Fire Brigade dance held in the Working Men’s Club (now the Library) to raise funds for the brigade. Datchet had acquired a motorised fire engine in 1924 and the Battys had also been to its ‘christening ceremony’ in Horton Road. They were also at Mr Page, the headmaster’s retirement, and were frequently involved with the organisation of events for Datchet Church Council.

They left Horncliffe around 1928. There are ship’s passenger records which show Emily and Henry returning from Kingston, Jamaica in July 1928. On the manifest, their proposed address in the UK was recorded as Redgrave Rectory, Diss, Norfolk; possibly the address of a relative?

Kelly’s Local Directories from the 1930s onwards, show that Emily and Henry were living at Woodside, Slough Road, next to Churchmead School.

After Henry’s death in 1936, Emily continued to live at Woodside and appears there in local directories right up until 1974. She died in 1975 and her death was registered in Slough.