Leonora Madeline Sillitoe Lewis was born in Wolverhampton. Her father, Frederick Lewis, was an iron mineral broker. Both Leonora and her sister Florence were named Sillitoe after their maternal grandfather, a hide merchant who had spent many years in Buenos Aires, Argentina. All their aunts and uncles, on their mother’s side, were born in Argentina. Their mother, Louisa, the youngest, was born in Lancashire.

In the 1881 census, Leonora was living with her sister and parents at 7 Summerfield Road, Wolverhampton. The family had three domestic servants. By 1901, her father had died and she and her sister were living with their widowed mother in Kensington Court Gardens, London, with one servant.

By 1911 (possibly earlier) her mother and sister had moved to Queensmead, a 10-roomed house in Buccleuch Road, Datchet, where they were living with a cook and domestic servant. (By 1915, the Widcombes were living to this address. They lost a son, Charles Ingleton Widcombe, during the war.)

Leonora was married in early 1908 at St Mary’s Church, Datchet. This suggests she was probably living with her family here before the wedding. Her husband was Alexander Phayre Churchill (1874-1948). He was born in King William’s Town, South Africa and was a Captain in the Essex Regiment when they married.

In 1911, on the night of the census, Leonora and Alexander were living in Ethelburga Road, Harold Wood, Hornchurch, Essex, with their five-month-old daughter, Patricia Ellen Churchill, who was born in Datchet in late 1910. They had three servants. Another daughter, Primrose Elizabeth Daphne Churchill was born c1914.

Leonora’s mother died in November 1911. Her probate records show that she was still living at Queensmead but that she had died at Princess Christian’s Nursing Home in Windsor. Probate was granted to Leonora’s sister, Florence.

Living at The Avenue

We know from Leonora’s Red Cross records that she was living with her sister at 4 The Avenue, now number 7 (the house on the right of the photograph) during WWI. This house previously been the home of Ronald Brakspear before the war and then Leslie Nugent who died in December 1914. Both men are remembered on Datchet’s War Memorial.

During the war, Leonora’s husband fought with the Essex Regiment at Gallipoli. He was promoted to Captain and later became Colonel of the Regiment. (An article in the Windsor & Eton Express, 29 May 1915, indicated that he was recovering from injuries sustained.) He survived the war and is listed on Datchet’s War Roll as Phayre Churchill.

While her husband was away and her children were still very young, Leonora volunteered with the Voluntary Aid Detachment (Bucks 4 VAD). From July 1915 to February 1919, she worked 1136 hours in the house, kitchen, linen room and wards at Slough VAD Hospital, Langley. (It is interesting to consider that a number of the volunteers had lived with domestic servants all their life so the experience of domestic work might have been something new.) Her sister, Florence Lewis, also volunteered. 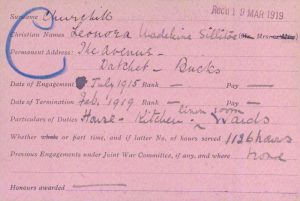 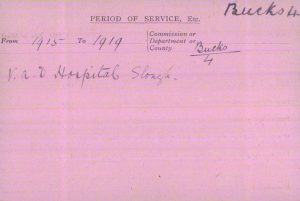 Like others, the Churchills made donations to the VAD Hospital which were reported in the local newspapers.

The Churchills stayed at The Avenue for a few years after the war. They were still listed in local directories around 1920-1922. By 1925, they had moved back to Essex. Kelly’s 1925 Local Directory lists Colonel Alexander Phayre Churchill living at Cornsland, Shenfield, Brentwood. They were still at this address when Alexander died in April 1948 and Leonora in August 1956.

Leonora’s sister, Florence, stayed in Datchet until her death in 1966. The address in her probate records is 7 The Avenue, Datchet (which was formerly number 4). She appears in Kelly’s Directories as Miss Lewis at 4, then renumbered 7, The Avenue from 1924. Probate was granted to her nieces’ husbands. Leonora’s daughter Patricia had married Hinton Roger Swire Sanguinetti, and Primrose had married Archibald Hugh Maitland Stewart.

Leonora’s husband fought at Gallipoli and that is probably where he was wounded (although more research is needed here.) There is an interesting note, relating to this, in Writing The Great War, Sir James Edmonds and the Official Histories 1915-1948, by Andrew Green. Leonora was asking for her husband’s regiment to be correctly credited with the capture of ‘Hill 138’: “Typical of the kind of request for revision received from individual soldiers was one from Mrs Leonore [sic] Churchill concerning her late [sic] husband, Captain A P Churchill, who had commanded a company of the 1st Essex regiment. …/… she wrote in 1925 that she had now had ‘the chance to get a thing put right that I have been trying ever since 1915 to get done.’ Her husband’s company had been ordered to attack what became known as Hunter-Weston Hill (or Hill 138) following the landings at Helles in April 1915. They succeeded, held it through the day of the 25th and handed it over to a company of the 4th Worcestershire Regiment in the evening. This company named the redoubt [temporary fortification] they had occupied the Worcester Redoubt and therefore took full credit for the capture of this objective in all subsequent accounts. In response to this request [Brigadier General] Aspinall confirmed that whilst the Worcestershires had the harder task, Mrs Churchill could ‘be sure that full justice would be done to both the Essex and Worcestershire regiments’.