Fred was born in Datchet and grew up here. He was a choir boy at St Mary’s and joined the Church Lads’ Brigade.

As an adult, Fred was well-known as the clerk in the L&SW Railway parcel office in Windsor where he worked for 14 years. He married Edith Ethel Bradfield in 1915 and moved to Boveney. They had two children Denys and Ronald.

Fred asked to be released from his work (railway workers were usually exempt from service) and in mid-October 1918 he joined the Machine Gun Corps as Private 185017. When he enlisted, he was living at ‘The Bungalow, Boveney’. Very shortly after enlisting, probably during his training, he caught flu and died in the camp hospital at Rugeley on 1 November 1918, just days before the end of the war. He was buried at Eton Wick and is remembered on the Memorial Gates, Eton. He also has an Imperial War Graves Commisson headstone. The inscription reads: Thy will be done. 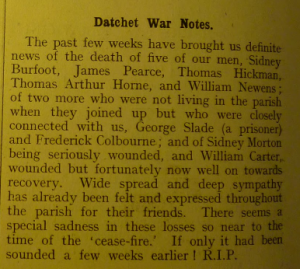 Fred’s death was reported in Datchet’s Parish Magazine at the same time as George Slade’s. Both men were not living in the Parish when they joined up but were ‘closely connected with us’, it said. George wasn’t born in Datchet, as Fred was, but he had lived here and his family worked at Leigh House. George, like Fred, had married and left the village. George is remembered on Datchet’s War Memorial but Fred isn’t.

As Fred was born here, had lived here, and had family here, he should have been considered for inclusion on the war memorial originally. He had married and moved away but so had others who are remembered on the memorial. There are also others who died of flu rather than being killed in action whose names are on the memorial. Fred’s name was added to Datchet’s WWI memorial in November 2018.