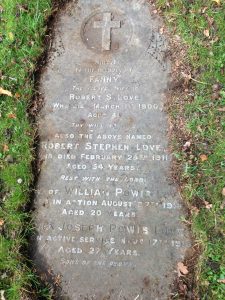 The family moved to Datchet sometime between 1891 and 1895. Robert, was working on the railway as a guard for L&SW and they lived at Station Cottages. William was born in the village in early 1898.

Their mother, Fanny, died on 1 March 1900 and their father Robert married Ann Ellen Rumble on 14 July 1901. There were at least two more children, Frederick Charles born in 1903 and George Stephen born in 1905.

The younger children, including William, would all have gone to school here.

Brothers Thomas, Joseph and William all served in WWI.

Thomas had joined the military in 1897. He became Company Sergeant Major, regimental number 5574 in the OBLI and was awarded the Distinguished Conduct Medal.

Joseph joined the 1st Battalion of the Oxfordshire and Buckinghamshire Light Infantry, the same battalion as Thomas, and served in India. He died on 17 November 1919 in Malta on his way home from India for six months’ leave.

William, the youngest of the three, must have signed up as soon as he was old enough. His military records (SDGW) indicate that he was resident in Peckham Rye and he enlisted in Maidstone. In May 1916, he was fighting with The Queen’s Own Royal West Kent Regiment. He later transferred to the Royal Fusiliers. He was killed on the Somme on 27 August 1918 and was buried at Vis-en-Artois British Cemetery.

William was not remembered on Datchet’s War Memorial. He is, however, remembered in an inscription on his parents’ grave in Datchet cemetery, which was probably commissioned by his brother Thomas. Datchet was his home village, where he was born, went to school and spent most of his short life. This made him a candidate for inclusion on the memorial. His name was added in November 2018. 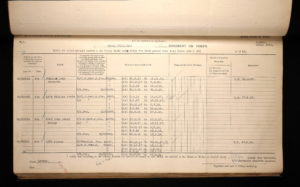