At 3pm on Tuesday 8 May 1945, after six years of war and millions of lives lost, Prime Minister Winston Churchill took to the airwaves to announce that the war in Europe was finally over; that hostilities would end officially at one minute after midnight.

The whole of Tuesday and Wednesday were declared public holidays and were devoted to celebrating the Victory in Europe. Crowds cheered in the streets when they heard the official pronouncement. Flags and banners were flown, houses and shops were gaily decorated with streamers and bunting, church bells rang and services of thanksgiving were held. The pubs did a roaring trade and remained open until midnight while all but the most essential businesses shut up shop for two days. There were fireworks and bonfires, street parties and sing-songs, with festivities lasting into the early hours.

In Datchet, a huge bonfire was lit on the village green. Everyone turned out to honour the day and stayed until the embers died. On Wednesday night, the programme was repeated, this time with a Royal Artillery band which played while the whole village danced themselves to a standstill. Even the Parish Council gave themselves a night off and postponed their meeting.

In all the neighbouring villages too, there were outdoor parties, open air dancing, bonfires and celebrations on an enthusiastic scale; the sky all around reflecting the glow of the beacons in the adjoining parishes.

The local newspaper reported that, ‘having danced and sung, laughed and wept, cheered and let off fireworks for the two most memorable days of their lives, the people of this district returned to work on 10 May to take stock of what it has all meant to them, and to outdo each other with tall stories of their adventures. From the welter of stories – delightful and crazy – two things stand out as representative of Windsor and Slough’s method of celebrating victory. First, the police and ambulance brigades, the National Fire Service, and the overworked publican, join in a unanimous expression of appreciation for the total absence of ugly incidents during the great good-humoured riot, during which hundreds of Eton boys ‘invaded’ Windsor. Secondly, the fact that the second day of the public holiday was, in Slough, devoted to the holding of street victory parties for the children, store cupboards being ransacked to provide a feast of rarities such as the little people did not know existed.’

In Datchet’s Parish Magazine, the vicar, Russell Potter wrote that ‘Datchet people will always vividly remember the keeping of VE Day, VE Day plus 1, and Thanksgiving Sunday, on 8, 9 and 13 May, with rejoicing, exultation and thanksgiving to God for victory in Europe. A large congregation gathered in church on Tuesday 8 May at 8pm for the special service of thanksgiving. On Sunday, all available spaces were filled with all the chairs from the schools and working men’s club, and a vast congregation filled the church for the special Thanksgiving Service. Members of the various organisations were present in large numbers – the Home Guard, Civil Defence, National Fire Service, Special Constabulary, British Legion (men) and British Legion (women), Voluntary Aid Detachment, Red Cross, Sea Rangers, Girl Guides, Sea Cadets, and soldiers from the Polo Ground.

‘Soon after the service, as many of us were standing together at the churchyard gates, the King and Queen drove by very close to us, passing on their way to give thanks in the service at St Paul’s Cathedral in the afternoon. What a privilege it was to shout our loyal greetings to their Majesties in Datchet on that great day.

‘A good number of us in Datchet have relatives very near and dear to us fighting or imprisoned in the East. Never for one moment did we forget them in our rejoicings.

‘Datchet church bells sounded victory chimes after the Prime Minister’s broadcast at 3pm on VE Day. Huge crowds gathered on the Green on VE Day evening when there was an enormous bonfire outside the schools [Gossip Green was a school car park until the 1960s] and on VE Day +1 when there was a torchlight procession and dancing on the Green. Victory parties of various roads were held in Victory Week or in Whitsun Week during the school Whitsun holidays, in the open air or the Schools, and are continuing to be held. Datchet was gloriously decorated with flags and parts of the village were flood-lit during Victory Week.’

Victory teas for the children 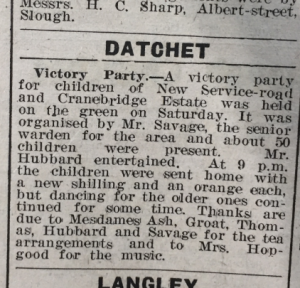 In its column of Datchet news, The Observer reported on Friday 18 May 1945 that ‘a victory party for children of New Service-road and Cranebridge Estate [part of present-day Montrose, Fairfield and London Roads] was held on the green on Saturday. It was organised by Mr Savage, the senior warden for the area and about 50 children were present. Mr Hubbard entertained. At 9pm the children were sent home with a new shilling and an orange each but dancing for the older ones continued for some time. Thanks are due to Mesdames Ash, Groat, Thomas, Hubbard and Savage for the tea arrangements and to Mrs Hopgood for the music.’ 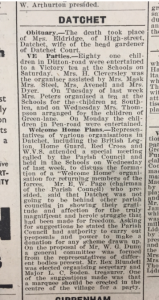 The village was still partying into June. On Friday 8 June 1945, The Observer wrote ‘Forty children from the village and London Road had their victory party on Saturday. Their tea included ice creams. Afterwards they were entertained by a ventriloquist and magician. A Royal Artillery band played for dancing and games. The party was organised by Mrs C Cleversley, Mrs Hall and Mrs Colsell. Mrs Ferris gave red and white roses for table decorations and helped with the tea. The Misses Edna Cleversley and Ivy Hammerson also assisted and Mr E W Page, the parish council chairman was present. 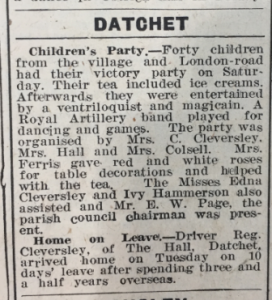 The Victory teas for children were the result of families clubbing together to share whatever was left in their store cupboard, and pooling food points. The war in Europe may have ended but food and clothing was still rationed. A typical weekly food ration for an adult included 4oz bacon/ham, other meat to the value of 1s/2d (about two chops), 3 pints of milk, 2oz tea, 1 fresh egg plus an allowance of dried egg, 2oz cheese, 2oz butter, 4oz margarine, 4oz cooking fat, 8oz sugar, 1lb jam or preserves every two months, and 12oz sweets ever four weeks. Other goods were rationed under a points system, with a set number of points per person per month to spend on tinned and dried foods.

The village was also starting to prepare ‘Welcome Home Plans’. The Observer reported that ‘Representatives of various organisations in Datchet, including the British Legion, Home Guard, Red Cross and Women’s Voluntary Service, attended a special meeting called by the Parish Council and held in the Schools on Wednesday of last week to discuss the formation of a ‘Welcome Home’ organisation for returning members of the forces. Mr E W Page (chairman of the Parish Council) who presided, said that Datchet was not going to be behind other parish councils in showing their gratitude and affection for the truly magnificent and heroic struggle that had been made for freedom. Asking for suggestions he stated the Parish Council had authority to carry out proposals and power to make a donation for any scheme drawn up. On the proposal of Mr W G Dunn, a general committee was formed from the representatives of different bodies present. Mr Rex Blundell was elected organising secretary and Major L C Soden, treasurer. One of the suggestions was that a marquee should be erected in the centre of the village for a party.