Lance Corporal John Hutton survived just over a year in the fighting line, engaged in some of the most ferocious battles of WWI.

He was born in Datchet in 1885, one of at least seven children born to Joseph and Julia Hutton who moved from Colnbrook to Datchet in the early 1880s. His father worked as a stockman and later as a milk carrier on farms.

According to census records, the Huttons lived at several addresses in the area. In 1891 they were at 2 Hambury’s Cottages near the waterworks on Slough Road. By 1901 they had moved to Datchet Common, very probably to Hales Cottages on Horton Road, near the corner with New Road. (These cottages no longer exist.) At Hales Cottages, they were living between two families of Lewins; Robert Lewin and his family on one side and his brother Joseph Lewin and his family on the other. (The Lewins had several sons and relatives who fought in WWI including James Albert Lewin who is also listed on the war memorial.) John’s sister, Elizabeth Hutton married David Lewin, another brother. (By the 1911 census, the Hutton’s house was occupied by the Halletts. George Hallett is another Datchet man remembered on the war memorial.)

John’s mother died in 1895 in her early forties, when John was 10 years old and his young brother George was just two. His father died towards the end of 1906, age 56, when John was about 21.

After their father’s death, John and George moved in with their older sister Elizabeth and her husband David Lewin at Clem Cottage which was set back off Horton Road. A few years later they all moved to 10 Ditton Road (now 30 Ditton Road).

In the early 1900s, John had been working as an assistant on an oil van, delivering oil, but by 1911 he had a job with the Thames Conservancy as a labourer, hand-dredging the waterways. George worked for the chemist as an errand boy, delivering medicines.

After the outbreak of war, George joined the Somerset Light Infantry while John enlisted in Reading (date unknown) and was sent France in October 1915 as Private 18806 (some records list him incorrectly as Private 18866) in the 8th (Service) Battalion of the Royal Berkshire Regiment.

The 8th was a Kitchener Battalion formed in Reading in September 1914 and attached as Army Troops to the 26th Division. The newly-formed Battalion underwent training on Salisbury Plain and returned to billets in Reading in November 1914. They moved to Sutton Veny Camp in May 1915 and proceeded to France on 8 August 1915, landing at Le Havre to join the 1st Brigade of the 1st Division which had suffered heavy casualties in the first year of the war.

To read more about the 1st Division, click here

The 1st Division remained on the Western Front throughout the war. As part of this Division, the 8th Royal Berkshires served in France and Flanders, taking part in many major battles, including Loos in late 1915, the Somme in 1916 and Ypres in 1917.

The Wardrobe website offers further information about the 8th: “The 1st was one of the original British Expeditionary Force Regular Divisions and the 8th battalion were expected to meet Regular standards with no allowances made for their volunteer status. They began their service in France with 27 officers and 765 other ranks. For the next two months they were in training for the forthcoming Battle of Loos, based in the Ames area. They set off on 21 September 1915 and were in position on 24 September. The Battle of Loos opened on 25 September and the 8th attacked Hulluch village. One platoon fought its way into the village and captured two German field guns as well as a number of machine guns. The casualties however were enormous. The 8th lost 493 and was reduced to 2 officers and 184 men. Many of the wounded were returned to the battalion and on 5 and 10 October, reinforcements arrived from the 9th (Reserve) Battalion. They attacked again on 13 October, losing nearly another 140 men and were then withdrawn to Lillers where they spent the winter. They were carrying out trench duties in the same area at Christmas.”

(John arrived in France in October 2015, so it seems very likely that he was sent to reinforce the Battalion after their considerable losses.)

“The 8th spent the first four months of 1916 in the area of Noeux-les-Mines, Lillers and Allouagne. They returned to action on 2 May when a strong fighting patrol attacked a German position known as the Double Crassier. Their next major action was on the Somme on 14 July 1916 when they attacked the two woods at Bazentin. This was followed up by an attack on Mametz Wood on 18 August and at High Wood on 3 September.  They were withdrawn from the line on 2 October and spent the winter and spring in and out of trenches in the Albert area spending Christmas in billets at Albert.

“The first month of 1917 was spent training moving to a position on the Somme south of Peronne remaining there until the end of March.”

With more than a year’s experience at the Front, John was appointed Lance Corporal. His Soldiers’ Effects records indicate that this was an unpaid position. It was effectively a trial period to see if he was suited to being a non-commissioned officer. 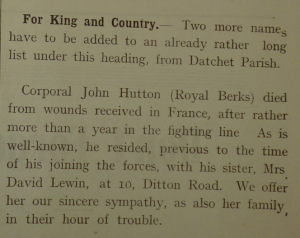 John was buried at Bray Military Cemetery, Somme, in plot II, row C, grave number 45. (A photograph of his gravestone is available here on the War Graves Photographic Project website.)

The cemetery  was begun in April 1916 by fighting units and field ambulances. In September 1916, the front line having been pushed further east, it was used by the XIV Corps Main Dressing Station and in 1917, the 5th, 38th and 48th Casualty Clearing Stations came forward and used it. In March 1918, the village and the cemetery fell into German hands, but were retaken by the 40th Australian Battalion on 24 August, and during the next few days the cemetery was used again.

Bray Military Cemetery now contains 874 Commonwealth burials of the First World War, 127 of which are unidentified.

John Hutton was awarded the British War and Victory Medals and 1914-15 Star. He was one of four Datchet men (along with Brakspear, Groves and Wilkins) who were in the 8th Royal Berkshires and who are remembered on the war memorial.

A book about the 8th Battalion is available from the Wardrobe website, here