Evelyn was christened Violet Hessie Evelyn Kelly. Her parents, Colonel Waldron Edward Roper Kelly and Hessie Chambers, were both Irish; her father from Sligo and her mother from Londonderry. Evelyn had an older sister, Ethel, who was born in Kent and a younger brother, Waldron, who, like Evelyn, was born in Ireland. In the 1881 census, they were living in Canterbury, Kent, but it seems that they then moved to the Caribbean where their father was Assistant Military Secretary. Another brother was born in Barbados in 1887 and died in Ireland in 1888.

The Colonel’s medals were for sale recently at Spink and Son, auctioneers. The accompanying description explained that he was commissioned into the Essex Rifles Militia in 1858, and transferred to the Highland Borderers Light Infantry in 1860. He was commissioned Ensign, 3rd Foot, in 1864 and promoted to Lieutenant in 1867, then Captain in 1875. He served with the 1st Battalion during the Perak Expedition in Malaysia, 1875-76. He served as Adjutant of the 3rd Battalion, 1880-1885 and was promoted to Major in 1881. He became Assistant Military Secretary to Major-General Sir C K Pearson, KCMG, CB, General Officer Commanding, West Indies, 1886-90. He was promoted to Lieutenant-Colonel and appointed Commanding Officer of the 2nd Battalion, East Kent Regiment in 1891 and retired in 1901, having subsequently served as Commanding Officer of the 3rd Regimental District.

A wedding in London

At the time of their marriage, Evelyn was living in Windsor and Arthur was a Lieutenant in the Royal Navy. (The Slough, Eton and Windsor Express includes a report of a Captain D’Aeth – possibly Arthur’s brother, Reginald – playing cricket in Windsor in 1899.)

There is evidence of Evelyn’s family in Datchet from around 1909. They lived at Patrixbourne, on North Green. (Patrixbourne is a village in Kent. It is thought that this name was of significance for the family who had lived in Kent. The family later called another house Patrixbourne.)

See the Datchet History website for more on the history of Patrixbourne house.

Perhaps Evelyn spent time with her parents in the village while her husband was away at sea. She joined in the fun at Datchet Regatta in 1909, as cox for Commander Rymer and H Dixon in the Gentleman’s Double Sculling race.

Volunteering with the VAD

Evelyn volunteered with Mrs Curling‘s Bucks 4 Voluntary Aid Detachment. She gave her permanent address as Patrixbourne which suggests she must have been living with her family in Datchet at the time. Her Red Cross records show that from October-December 1915 she worked for 420 hours doing night work in the kitchen and house work. By that time the hospital had moved from St Bernard’s Convent in Slough to Birchfield in Middle Green, Langley. 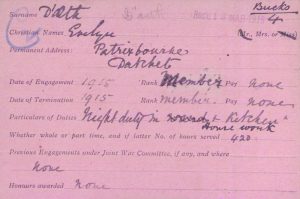 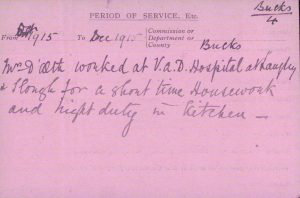 It’s not yet known where Evelyn spent the rest of the war. Her brother Waldron Harold Fletcher Kelly, was a Lieutenant-Colonel in the Royal Army Services Corps. He was at Salonika in December 1915 and remained in the military for a time after the war, based in India.

Her husband, Arthur, was already an officer of some seniority when war was declared in 1914. He commanded the armoured cruiser HMS Minotaur at the Battle of Jutland and was appointed a CB, and to the Legion of Honour, and was mentioned in dispatches. In December 1916 he was commander of HMS Dreadnought and in February 1918 was appointed commander of the armoured cruiser HMS Shannon.

In February 1919, Arthur was appointed Captain of the Portsmouth Navigation School, also known as HMS Dryad. His last command before retirement in 1923 was as Captain-in-charge, Portland, and he was promoted to Rear-Admiral in 1924.

Evelyn appears to have visited Datchet frequently after the war. Articles in the local newspaper show that she helped with the teas and ices at Datchet summer fete and bazaar in July 1923 and was also present when Percy de Paravicini’s memorial plaque was unveiled in St Mary’s Church in November that year.

Evelyn and Arthur later moved to Knowlton Cottage in Victoria Road, Fleet, Hampshire. They appear to have had no children. Arthur died in 1956 and Evelyn in 1960. After Evelyn’s death, probate was granted to her brother, Waldron Harold Fletcher Kelly DSO, retired Colonel HM Army.