Francis William Higgs was born in 1897 at Bourton in the Vale of White Horse, about six miles north-east of Swindon. He was known in Datchet as William, perhaps to avoid confusion with his father, Frank Higgs.

Frank was a cowman, born in 1870 at East Hannay, near Wantage. In late 1896, he married Mary Ann Woodward who came from Great Coxwell, near Faringdon.

Francis William was the eldest of their three children. His sister, Beatrice Annie, was born in Bourton in 1899. (The family was still in the village in 1901; the census recorded them at Swan Hill.) His brother, Henry James, was born in Mortimer, south of Reading in 1907 which suggests the family was living there at the time. By 1911 they had moved to a cottage at Lower Mount Farm, Cookham. This is now the Copas Turkey Farm. The census doesn’t indicate whether 14-year-old William was still at school in 1911 and his subsequent occupation isn’t known. Perhaps he became an agricultural worker like his father?

At some point between 1911 and 1915, the family moved to Datchet, to 1 Goodwin Cottages. These cottages used to be on the east side of Slough Road, towards The Myrke. When William enlisted he gave his home address as Datchet, and Marshall’s Local Directory also recorded the Higgs at Goodwin Cottages in the 1916 and 1920 editions.

William signed up in Aylesbury although the exact date he enlisted isn’t yet known. His name is not included in the Roll of Honour published in the local paper in January 1915 which suggests that he joined up after this date, perhaps when he turned 18. He became Private 3466, later Private 266242, in the 2/1st Bucks Battalion of the Oxford & Buckinghamshire Light Infantry, OBLI. (A note about the army numbers: in 1917 all men serving with Territorial Force units were given new six-digit numbers. Prior to that they used four-digit numbers.)

The 2/1st Bucks Battalion had been formed in Aylesbury in September 1914 as a second-line unit. In January 1915 it moved to Northampton and was attached to the 184th Brigade of the 61st (2nd South Midland) Division. The 61st was a second-line Territorial Force division raised as a reserve for the first-line battalions of the 48th (South Midland) Division. It moved to Essex in Spring 1915 then to Salisbury Plain in early 1916 before being mobilised for war, landing in France at Le Havre in May 1916.

The 61st engaged in various actions on the Western Front including The Attack at Fromelles (an unsuccessful diversionary tactic during the Battle of the Somme in July 1916); and, in 1917, The Operations on the Ancre, and The German Retreat to the Hindenburg Line. That was followed by The Battle of Langemarck, 16-18 August 1917. Langemarck was part of the Battle of Passchendaele, also known as the Third Battle of Ypres, which lasted from July to November 1917. The objective was to take control of the ridges south and east of the Belgian city of Ypres. (See Albert Carrod’s page for more on the days after the Battle of Langemarck, which were to be his and William’s final days.)

On 18 August 1917, the 2/1st Bucks Battalion arrived at Goldfish Chateau Camp near Ypres. On 20 August, they advanced to the support line near Wieltje but sustained many casualties from shell fire. After dark they went into the line and the following day they prepared for a major attack on the 22nd. The Companies of the 2/1st Bucks Battalion and the Oxfords were to spearhead the advance, attacking in waves. The final objective was a position on the Kansas Cross—Winnipeg Road.

At dawn on 22 August, the Artillery put down the barrage and the waves advanced. They were met with strong German resistance. At least some of the Bucks reached their objective but, exposed to fire from all sides, they became cut off. Enemy snipers targeted them throughout the day, firing at runners ferrying information to and from Headquarters, and even shooting stretcher-bearers and wounded soldiers crawling to safety. Many hours later, at 4pm, the Oxfords captured the position at nearby Pond Farm. This relieved some of the pressure on the Bucks. A party was sent forward to take the gun-pits. They found them deserted by the enemy but sheltering many of the wounded men of the Bucks Battalion.

The Battalion lost more than half its manpower that day. In Citizen Soldiers of Buckinghamshire 1795-1926, Major General J C Swann wrote: “The losses were found to have been very heavy; 13 officers and 637 other ranks went into action, 11 officers and 338 other ranks were reported as casualties.” Both Datchet men, Francis William Higgs and Albert Edward Carrod, were killed that day.

An OBLI blog has published an extract from Major General Swann’s book which you can read here.

The memorial bears the names of almost 35,000 officers and men whose graves are not known. For more details about William’s memorial, see the Commonwealth War Graves Commission website.

Following the confusion of battle, with so many men missing, it was perhaps unsurprising that in November 1917 Datchet Parish Magazine reported that Francis William Higgs was wounded and missing. His family didn’t receive confirmation of his death until a year later. In August 1918 Datchet Parish Magazine reported that he had been killed in action. (Please click on the images below for a larger version.) 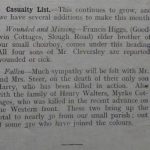 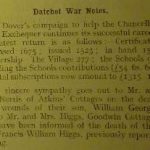