Leonard was born in Datchet in late 1895. He was one of at least nine children – six boys and three girls – born to David Henry Groves and Louisa Caroline Evered from Stoke Poges. David and Caroline had married in the area in late 1889. In the 1891 Census, they were living at Windsor Road, Upton-cum-Chalvey, with their first child, Amy Louisa, born 1890. Amy was soon joined by more siblings: George in 1892, Ernest 1893, Leonard 1895, Sidney 1897, and Lily Amelia 1900. (The boys – George, Ernest, Leonard and Sidney – would all later fight in WWI.)

The family appears to have lived for only a short time in Datchet. David was a gardener and the family moved frequently, perhaps following his work. Leonard, Sidney and Lily were all born in Datchet and their birth dates suggest that the family was living in the village from at least 1895 to 1900. Leonard was baptised here in 1896. By early 1901, after Lily’s birth, the family were on the move again, to 6 Castle View, Upton-cum-Chalvey. Another daughter, Cecilia Alice was born in Chalvey in 1902; and two more sons, Alfred Edward and Albert, were both born in Eton in 1903 and 1906.

The 1911 census recorded the Groves at Colenorton Cottage, Common Lane, Eton. This was next to Colenorton, home to retired Eton schoolmaster, Edward Compton Austen Leigh.

All the Groves’ children, apart from Edward, were at home with their parents on the night of the census. Their father, David, was working as a gardener at Eton College. George was working as a grocer’s assistant and Sidney was a gardener but it’s not clear from the 1911 census what Leonard was doing. Ernest was in London, working as house boy for the Turner family in South Kensington.

From an article in Datchet Parish Magazine, below, we know that Leonard worked in service at Datchet House, the grand white Georgian house, next to the Church, on London Road. The owner of Datchet House from 1911 was Sir Lionel Cust who later designed Datchet’s War Memorial. He was an art historian of considerable repute and Director of the National Portrait Gallery. He was also one of King Edward VII’s Gentleman Ushers at Court and a personal friend, with responsibility for collections in all the Royal Palaces. (Read more about Cust and Datchet House on the Datchet History website.)

Leonard arrived in France on 5 December 1915. According to the website, www.thewardrobe.org.uk, the 8th Battalion spent the first four months of 1916 in the area of Noeux-les-Mines, Lillers and Allouagne (between Calais and Arras). They went into action on 2 May when a strong fighting patrol attacked a German position known as the Double Crassier. Their next major action was on The Somme on 14 July 1916 when they attacked the two woods at Bazentin. This was followed up by an attack on Mametz Wood on 18 August 1916. It was here that, many months later, it was assumed that Leonard must have been killed.

Clearly there was great confusion surrounding Leonard’s death. With more than 60,000 deaths of allied soldiers at The Somme between July and November 1916, the army’s administration must have been in complete disarray. There was a report in the Windsor, Eton & Slough Express in April 1917 that Leonard had been wounded. Datchet Parish Magazine reported in June 1917, that Leonard, who had formerly been in service at Datchet House, had been missing for some considerable time but was now believed to be a prisoner of war. A month later, they reported that Leonard was still missing, as ‘nothing authentic has been heard and we cannot trust rumours’.

Nearly a year after his death, the army confirmed that Leonard must have been killed in action, age 20, on 18 August 1916 when the 8th attacked Mametz Wood. 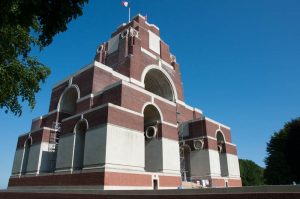 Leonard is remembered at Thiepval Memorial to the Missing at the Somme, France, Pier and Face 11D. To read his records at the Commonwealth War Graves Commission website, click here.

The CWGC website offers the following information about the memorial: On 1 July 1916, supported by a French attack to the south, 13 divisions of Commonwealth forces launched an offensive on a line from north of Gommecourt to Maricourt. Despite a preliminary bombardment lasting seven days, the German defences were barely touched and the attack met unexpectedly fierce resistance. Losses were catastrophic and with only minimal advances on the southern flank, the initial attack was a failure. In the following weeks, huge resources of manpower and equipment were deployed in an attempt to exploit the modest successes of the first day. However, the German Army resisted tenaciously and repeated attacks and counter attacks meant a major battle for every village, copse and farmhouse gained. At the end of September, Thiepval was finally captured. The village had been an original objective of 1 July. Attacks north and east continued throughout October and into November in increasingly difficult weather conditions. The Battle of the Somme finally ended on 18 November with the onset of winter.

The Thiepval Memorial, the Memorial to the Missing of the Somme, bears the names of more than 72,000 officers and men of the United Kingdom and South African forces who died in the Somme sector before 20 March 1918 and have no known grave. Over 90 per cent of those commemorated died between July and November 1916.

Leonard’s brother, Ernest, had joined the Slough Territorials in 1914 and later became private 1518 in the 2/1st Buckinghamshire Battalion. He was killed in action on 19 July 1916 and is remembered at Laventie Military Cemetery. Sidney, was wounded and taken prisoner of war; only George returned relatively unscathed.

Ernest and Leonard are both remembered on Eton Memorial Gates but only Leonard is remembered in Datchet on our WWI memorial.

Leonard was awarded the Victory and British War Medals and 1914-15 Star.

After the war his parents were living, and perhaps working, at Lynwood, Sunninghill.

With thanks to Alistair Ward for his research.