Artemus was born in Isleworth. His family moved to Datchet sometime before 1893 and the 1901 census records the family in Penn Road. After working for a while as a market gardener, Artemus joined the Royal Munster Fusiliers in Ireland in 1903. He married Edith Ethel Blanche Partridge in Fulham in 1908 and by 1916 had six children; their different birthplaces provide an indication of where he was serving in the UK. Constance Mary was born in 1908 in Limerick; Artemus Albert was born in 1910 in South Wales; Richard Sidney in 1911 at Warley (Marriage quarters); Lily Blanche in 1913 in Bordon (Hants) Army Camp; Godfrey Charles in 1914, also at Bordon; and Harold James in 1916 in Windsor.

Artemus transferred from the Royal Munster Fusiliers to The Queen’s Royal West Surreys in 1911 as a Sergeant Tailor. On the night of the 1911 census, he was at Mooltan Military Barracks in Tidworth, Wiltshire. During WWI, he served in various RWS battalions including 1st, 6th, 7th and 8th. When he died he was serving as a Sergeant with B Company, 8th Battalion The Queen’s Royal West Surreys.

Artemus died after peace had been declared, on 30 December 1918, of influenza or meningitis. He was buried in France, in Tournai Communal Cemetery, with the epitaph “He died that we may live” chosen by his wife, Edith, who was living at 61 Peascod Street, Windsor. (Some of Artemus’s badly-damaged military records can be found on the Ancestry website, including a letter from Edith querying the whereabouts of his silver watch and chain which should have been returned to her after his death.)

Artemus was perhaps not remembered on Datchet’s War Memorial because he had married and left the village but he still had family here. Nor is he remembered in Windsor where his wife lived. His brothers Richard and Sidney both served in WWI and were both taken prisoners of war. Sidney survived but Richard Gough Ward also died of flu in November 1918 just before peace was declared.

In February 1919, their father, Charles, wrote to the military from his home at 1 Ditton Road. This letter, below right, was badly damaged but has been transcribed here as far as possible: 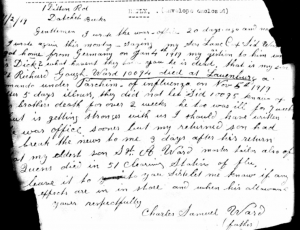 Gentlemen, I wrote the war office 20 days ago and no [reply] I wrote again this morning saying my son Lance Corporal Sid Ward got home from Germany on Jan 4th 1919, my question to him was [where is] Dick? What, haven’t they told you, he is dead. That is my son, Richard Gough Ward, 10094, died at Lauenburg a …. [Com]mando under Parchim [prisoner of war camp] – of influenza on Nov 5 1919 … 5 days illness. They did not let Sid 10095 know of his brother’s death for over two weeks. He too was ill for 7 weeks but is getting stronger with us. I should have written to the war office sooner but my returned son had to break the news to me. Three days after his return … my eldest son, Sgt Artemus Ward, master tailor, also of … Queens, died in 51 Clearing Station of flu. I leave it to you Sir to let me know if any … effects are in store and when his allowance …   Yours respectfully, Charles Samuel Ward, Father.

Artemus Ward had lived in Datchet and had family here but only Richard Gough Ward was remembered on the memorial. (Their brother Sidney returned to Datchet after WWI and, many years later, was buried in Datchet Cemetery.) Artemus’s name was finally added to the memorial in November 2018. Artemus still has family in the village to this day and on Remembrance Day 2018, his descendant was invited to lay a wreath of poppies in remembrance of all the soldiers whose names were added in 2018. 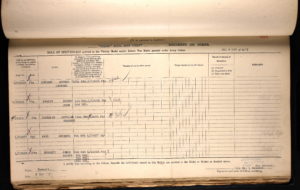 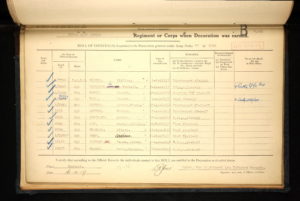 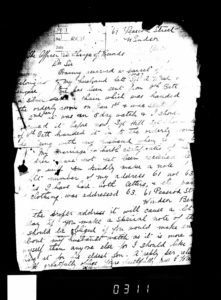