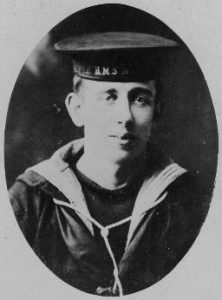 Percival John Barrott was born in Horton to parents James Henry Barrott, an engine driver at a saw mill, and Johanna (nee Fanning). In early 1911, he was living with his mother, a laundress and, by then, a widow, and younger brother, Brian, at Welley, Datchet. He had three other brothers, James, Albert and Jack. All five fought in WWI.

Percy married Dorothy Morgan in May 1911, moved to Maida Vale in London and started a family. They had two daughters, Dorothy born in 1912 and Marjorie born in 1915. He joined the Royal Navy as Stoker 1st Class SS/103275 aboard HMS Aboukir. He was killed in action on 22 September 1914 when his ship was hit by a torpedo from a German U-Boat in the North Sea, together with two of her sister ships. He is remembered at Chatham Naval Memorial.

Youngest brother, Brian, became Private 50541 in the Royal Berkshire Regiment. In July 1918, he was listed as missing (see the International Red Cross archives). He survived the war and married Hilda Grace Pavers in 1925. Their marriage was registered in Eton. Brian died in 1953. His probate records list him still at the family home, Meadow View, Welley Road. Brian and Hilda had at least two children, one of whom was Brian R J Barrott, 1926-1963.

Eldest brother, James Henry, was a milk seller in the 1911 census. He emigrated to Australia. In 1913 he married Gladys Amelia Smith in Randwick, New South Wales. He returned to fight in WWI, departing from Sydney aboard HMAT A70 Ballarat. James became Private 3009 in the 4th Infantry Brigade, 13th Infantry Battallion AIF, 10th Reinforcements, and later Corporal 3009 in the 45th Battalion. He was reported wounded in the Windsor & Eton Express on 18 August 1916, and left almost blind. He returned to Australia (non-effect date 13 February 1917) and lived in Berry Macarthur. James and Gladys Amelia had at least one son, James W Barrott, 1914-1996. James died in 1964.

Albert Barrott moved to Canada where he was a farmer. He enlisted in the Canadian Expeditionary Force in January 1916 and was listed in the Buckinghamshire Roll of Honour 1914-1916 as a private in the Army Services Corps. After the war he returned to Canada and died in Winnipeg in 1938.

Jack Patrick became Able Seaman J10362. He had already joined the navy by the 1911 census, and was aboard HMS Impregnable in June 1914. He survived WWI and remained in the navy until at least 1920 when he was invalided out of service. He died age 33 in 1928 at Brentford, Middlesex.

In October 1916, Datchet Parish Magazine, reported that Jack had been seriously wounded. This was followed in the December issue with a correction that it was James Henry, not Jack Patrick, who had been severely wounded. 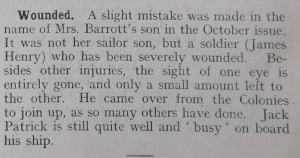