Who are the WWI soldiers remembered in Datchet's cemetery?

The Parish Council Cemetery in Ditton Road was used after 1899 when St Mary’s churchyard was closed due to there being no more space. Brief details of the WWI soldiers buried or remembered in the cemetery are listed below. All of these men except Stephen Argar, Robert Harman Llewelyn, William Powis Love and Artemus Ward are listed on the WWI memorial on the village green.

Where: As you enter the cemetery, go straight ahead past the chapel, this memorial is on the left.

Who: John was among the first men to enlist in 1914 and was killed in March 1915. He was buried at Le Touret Military Cemetery, Richebourg-L’Avoue, Pas de Calais but his family added a memorial inscription to him on the family monument. This inscription tells how John’s regiment was ‘decimated but earned undying fame’. John’s father, ‘Jock’, was a JP, County Councillor, and vice-chairman of the Parish Council. He came from Scotland in 1894 to run Riding Court farm as a market garden and dairy farm. He became a central figure in local life, behaving as and being treated as, the ‘Squire’ of the village. His son John was a farm manager at one of the Kinross subsidiary farms in Stanwell before the war and is also listed on both Datchet and Stanwell memorials. To read more about his life, click here. 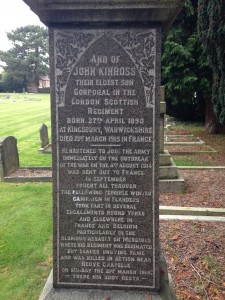 The memorial to John Kinross 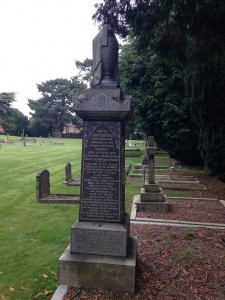 Where: Turn left along the path which runs parallel to the road. This memorial is on the right.

Who: John Gillis Butt lived at 38 Slough Road which was Crumlin Lodge. He was born in India and had joined the Royal Army Medical Corps as a doctor. He gained his commission four days before Britain entered WWI. He was shot in October 1914 while dressing the head-wound of his commanding officer. He has no known grave but is remembered at the Ypres (Menin Gate) Memorial in Belgium. His parents are buried in Datchet and their headstone has an inscription on the reverse which reads ‘In loving memory of Lieut J C Butt, RAMC, attached to 1st Battalion Grenadier Guards. Only son of Colonel and Mrs Butt who fell in action at Gheluvelt, Flanders, October 14th 1914’. To read more about John’s life, click here. 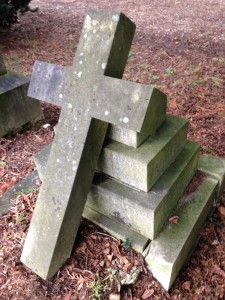 The cross which formerly stood on top of the base stones now leans against them. 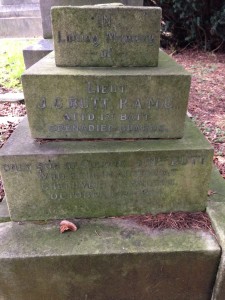 Where: Continue along the gravel path, walking parallel to the road. This War Commission Grave is a little further along, on the left, hidden behind the bushes.

Who: Frederick Albert Boxall lived at 28 Green Lane but his house no longer exists. He was a coachman, chauffeur and a ‘rough rider’. He caught typhoid in France and returned home to recover before returning to the Front. On his next visit home he died of pneumonia and was buried here. A party from the Coldstream Guards accompanied his funeral cortege. To read more about his life, click here 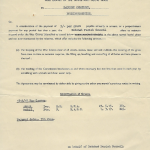 The graves of Frederick Boxall and Stephen Argar were maintained by the Imperial War Graves Commission, now the Commonwealth War Graves Commission. The document shown left, (click on the image to enlarge) is an agreement between the IWGC and Datchet Parish Council, drawn up in 1949. The IWGC was to pay 5/- per grave annually in arrears to the Parish Council which, in turn, would maintain these war graves, removing weeds, stones, loose soil and rubbish; mowing the grass as required; filling, levelling and re-turfing holes and bare places; and washing the headstones when necessary but not less than once a year with a scrubbing brush and clean water.

Where: This grave is in the row behind Frederick Boxall’s grave. The black urn makes it easy to spot.

Who:  This is the family grave of William Sutton. William lived at Lawn Cottages, 55 Horton Road. Perhaps his father’s work as a chauffeur ignited William’s interest in engines as he became a motor fitter. William joined the military transport section of the ASC but spent most of his time in hospital. He died of bacterial meningitis and was buried in Datchet with military honours. To read more about his life, click here 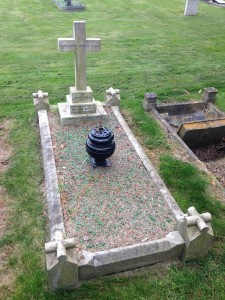 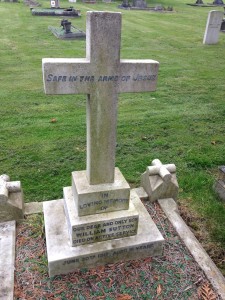 Dedication to William Sutton, a ‘dear and only son’

Where: Another War Commission headstone, this is in the row behind William Sutton’s grave.

Who: Stephen Argar, from Folkestone, was billeted in the village and drowned in a boating accident here in early 1915. He is not listed on the memorial on the Green as he had no other connection with Datchet. His was probably the first military funeral the village had seen in a generation; his coffin was placed on a gun carriage and his brigade lined Horton Road. Click on the photograph of the page from Datchet Parish Magazine, December 1914, for more information about the brigade billeted in Datchet. 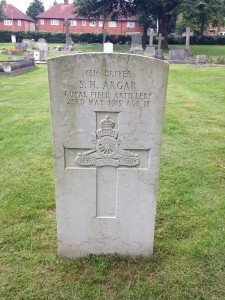 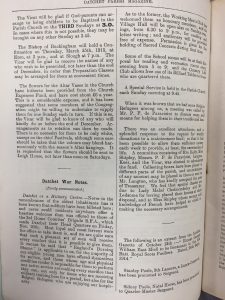 Where: On the same row as William Sutton’s grave, close to the intersection of the two gravel paths.

Who: The McGrigors were a famous military family who lived in London and also at Rosenau on Southlea Road (this has since been replaced by Woolacombe). James joined up at the very start of the war and was shot through the lung and shoulder in October 1914. He died from his wounds in London and is buried in Datchet. His brother, Charles, also served although he is not listed on Datchet’s War Roll. To read more about James’s life, click here. 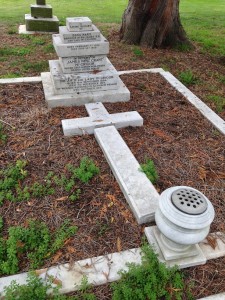 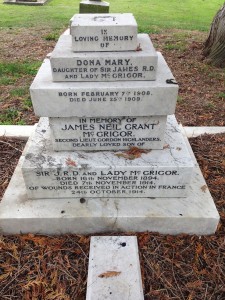 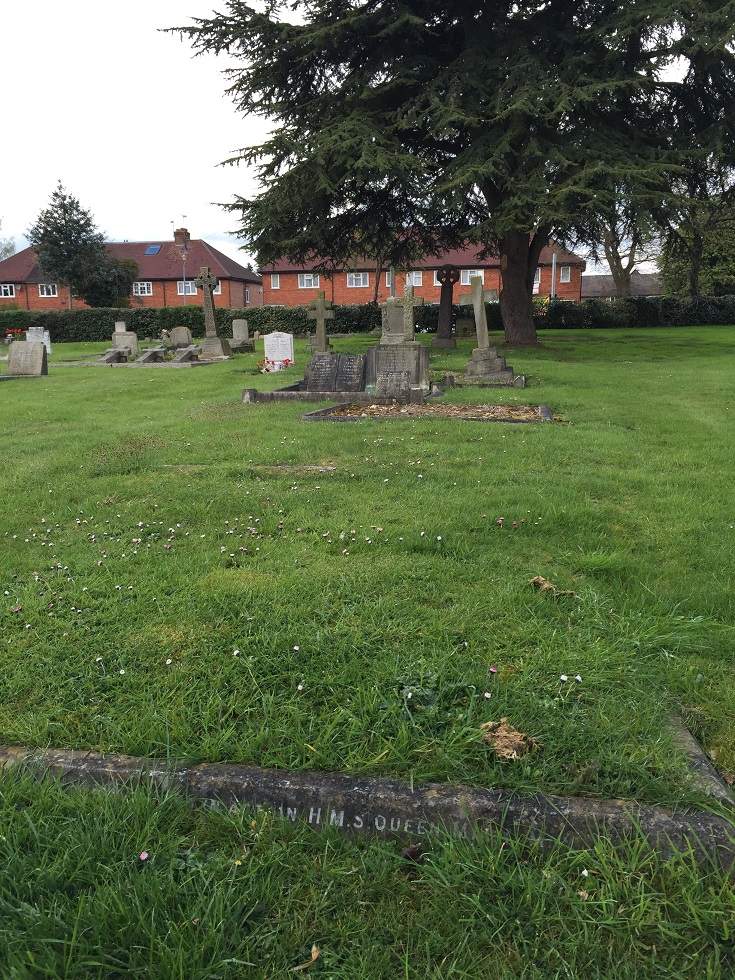 Hidden in the grass

A memorial to Robert Harman Llewelyn 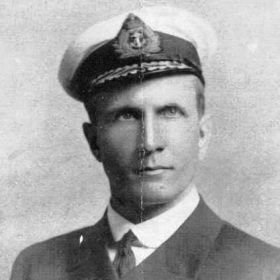 Where: Hidden in the grass behind Neil McGrigor’s grave is a memorial to Robert Harman Llewelyn, born 1884. His name appears on one of the perimeter stones of his uncle’s grave

Who: Robert, pictured above, was the nephew of Datchet’s vicar, Rev John F Llewelyn. He had joined the Navy around 1901, long before the war started, and was a frequent visitor to Datchet. In WWI he was Commander of HMS Queen Mary which was lost at the Battle of Jutland, 31 May 1916. She was hit twice and her magazines exploded, sinking the ship and resulting in the loss of more than 1200 crew. There were just 20 survivors. Two men from the village, John Bettles and Henry George Aldred, were also on board; their names are listed on Datchet’s WWI memorial but Robert’s is not as he lived in Hampshire. All three men are also remembered on the Portsmouth Memorial.

Where: From Robert Harman Llewelyn’s memorial, keep heading towards the road, passing the ornate Celtic Cross of the Curling* family on your right, the Stanley family grave is on the left, under the tree, and is marked by another Celtic Cross.

Who: Ronald Bruce Stanley lived at Holmwood, which was on the site now occupied by Ruscombe Gardens at the corner of Slough Road and Eton Road. Ronald was a clerk at the Stock Exchange in London. Initially in the Army Services Corps, he was sent to the front in March 1915 and transferred to the RAF. He died in the War Hospital in Sunderland in 1919 and was buried in Datchet. For more details about his life, click here

Where: North corner, near the hedge and Ditton Road. From Ronald Bruce Stanley’s grave, turn right, so the road is on your left, and walk towards the hedge. 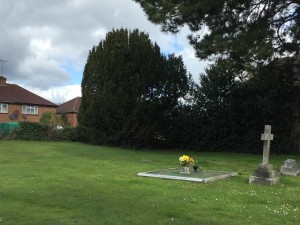 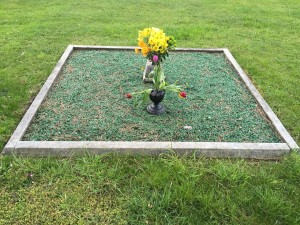 An inscription in memory of Richard and Artemus

Who: Three Ward brothers fought in WWI, Artemus, Richard and Sidney, but only Sidney survived. There is an inscription in memory of Artemus and Richard on this family gravestone where Sidney is also buried.

Artemus, the oldest of the three, had joined the Royal Munster Fusiliers in 1903. He transferred to the Royal West Surreys in 1911 as a Sergeant Tailor and served with various battalions of the regiment.  He married in Fulham in 1908 and by 1916 had six children. In 1912 Richard and Sidney (by then married with four daughters) also entered the military as tailors, joining the 1st (Queen’s) Royal West Surrey Regiment.

The 1st Queen’s fought at the First Battle of Ypres. By the end of the first week of November 1914, there were just 32 survivors out of a total of 998 men from the 1st Battalion. Richard and Sidney survived but were taken prisoners of war and spent the rest of the war in captivity. Just nine days before peace was declared, Richard died of flu. He was buried at Hamburg Ohlsdorf Cemetery.

Sidney also fell ill in Germany. When he returned home to Datchet on 4 January 1919, he discovered that his father was unaware of Richard’s death. (After peace was declared, the family had no doubt hoped that all three sons would be returning home.) Three days later, Artemus died, of either flu or meningitis, in 51 Clearing Station. He was buried at Tournai Communal Cemetery in France.

Richard is remembered on Datchet’s War Memorial, and he and his brother Sidney are both listed on the village War Roll. Artemus is not remembered either on the memorial or the war roll, possibly because he had been in the army since 1903 and also had married and moved away from the village.

Where: From the Wards’ grave, walk along the hedge, with the road behind you. This gravestone is hidden in the grass.

Who: This is the grave of Robert and Fanny Love. Three of their sons served during WWI. Two are remembered on this gravestone although only one, William, was killed in action during WWI. The Loves moved to Datchet around 1895. Robert Love was working on the railway and the family lived at Railway Cottages. His first wife died in 1900 and he remarried in 1901. Robert died in 1911 and as the cottage came with his job, the family would have had to move. It is at this point that we lose track of the family in the village. The eldest son, Thomas, born in 1879, had joined the army by 1897. He survived the war. Joseph, born in Battersea in 1892, joined the same battalion as Thomas, the 1st Oxfordshire and Buckinghamshire Light Infantry, and served in India from December 1914. He died in November 1919 in Malta on his way home from India for six months’ leave. William, born in Datchet in 1898, joined the 7th Royal Fusiliers and was killed on the Somme in August 1918. None of the three is mentioned on the Datchet War Roll as the village probably lost contact with the family.

*The Curling family erected the first WWI memorial in the village, the crucifix in London Road in 1919. This was intended as a French-style wayside shrine at the outskirts of the village. For a year it was the village’s only war memorial. To read more about Datchet’s three WWI memorials, see www.datchethistory.org.uk

There are also four WWII War Graves Commission headstones in the cemetery.