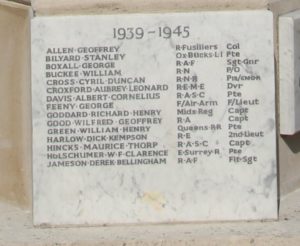 The 75th anniversary of VE day and the end of WWII in Europe will be commemorated on 8 May 2020. To mark this, the DVS has started researching the stories of the 30 WWII servicemen whose names were added to Datchet’s War Memorial in 1989. The following information comes from the Roll of Honour website. If there is anything you can tell us about any of these men and their connections with Datchet, please do get in touch with us. We’d be delighted to hear from you.