Norah Robinson, pictured left, was a daughter of Lord and Lady Rosmead and granddaughter of the First Baron Rosmead, Sir Hercules Robinson. She was born in 1893 in Athlone and had two younger siblings, Hercules Edward Joseph, born in 1895 in Cork; and Nea Kathleen Elizabeth Clare born in 1898 in Colchester.

By 1901, the family had moved to Berkshire. On the night of the 1901 census, they were at Stella Lodge, Winkfield. Soon afterwards they moved to Ascot. Kelly’s Local Directories for 1903 and 1907 list them at Moorlands, South Ascot, which still exists. The spring 1911 census recorded the family at Wycombe Lodge, Bexhill-on-Sea. Lord Rosmead was listed as a Conservative peer. 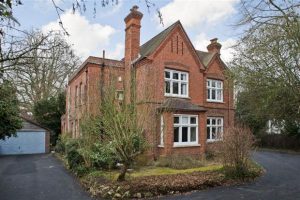 Sometime between the 1911 census and the start of WWI, the family moved to Westfields on Eton Road in Datchet, pictured right. Norah’s brother, Hercules, had moved to Canada where he was working as a rancher. He enlisted there in 1914 and later transferred to The Buffs, The East Kent Regiment.

In 1915, Norah was engaged to George Montagu Parkin, a soldier in the 2nd North Midland Brigade, Royal Field Artillery. Their engagement was announced in the April issue of Tatler magazine but was subsequently broken off.

From 1915 to 1916, Norah was working as a housemaid for a Voluntary Aid Detachment Hospital in Langley. Her Red Cross records indicate that she worked about 400 hours there. 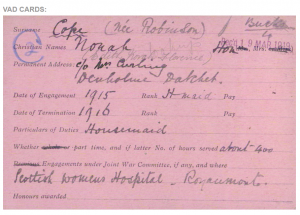 Norah’s brother Hercules died of wounds sustained at Loos in September 1915. (He is remembered on Datchet’s War Memorial. For more information, click here: Robinson, Hon Hercules Edward Joseph.) His death may have been a contributing factor to Norah’s decision to join the Scottish Women’s Hospitals for Foreign Services (SWH) in Edinburgh.

Founded in 1914 by the Scottish Federation of National Union of Women’s Suffrage Societies, the SWH provided nurses, doctors, ambulance drivers, cooks and orderlies. They also promoted the cause of women’s rights and helped to win those rights through their involvement in the war.  By the end of WWI, 14 SWH medical units had been outfitted and sent to serve in Corsica, France, Malta, Romania, Russia, Salonika and Serbia.

From February to May 1917, Norah worked as an orderly at the Abbaye de Royaumont, the largest British voluntary hospital. Located near Asnieres-sur-Oise, about 30kms north of Paris, it was one of the closest to the front line. Under the direction of the French Red Cross, it operated continuously from January 1915 to March 1919 and treated many of the wounded soldiers from the Somme. 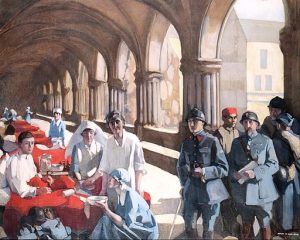 Image: The Scottish Women’s Hospital – In The Cloister of the Abbaye at Royaumont. Dr Frances Ivens inspecting a French patient by Norah Neilson-Gray

In mid-1917, Norah returned to Datchet on leave and in August she married John Lachlan Cope who had previously been a member of Ernest Shackleton’s Expedition to the South Pole. According to Kelly Tyler-Lewis in her book The Lost Men: The Harrowing Story of Shackleton’s Ross Sea Party, John had been serving as commandant of the British American Overseas Hospital in 1917. (In May 1917, his brother, Gerald Quin Cope, had died in Number 7 General Hospital, at Saint Omer, France.) 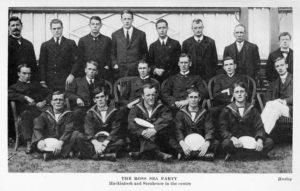 The photograph, left, c1914-17 taken by Frank Hurley, shows the crew from the Aurora (Ross Sea Party in Shackleton’s Endurance expedition). John is pictured on the back row, third from the left. (Scroll down the page for more information about John Lachlan Cope.)

By the time of his marriage to Norah in August 1917, John was a lieutenant in the Royal Navy.

The couple were married at St Mary’s Church in Datchet. On 4 August 1917, the Windsor & Eton Express published a report  of the wedding, left, which reveals a little more about Norah’s work as an orderly. The article reads: ‘The bride has recently returned from working in a French Hospital, and was only back on short leave when the marriage was arranged. She was not in good health on her return, and great sympathy was felt with her and her mother when it was known, owing to a sudden severe illness, the marriage might have had to be postponed, but happily she recovered. Lady Rosmead’s only son, the Hon. Hercules Robinson, fell at Loos, and was a brave and promising soldier. Lord Rosmead in an invalid.” In the absence of her father, Norah was given away by Colonel Kelly, late of “The Buffs” regiment in which her brother had served.

No record has been found yet to indicate that Norah returned to the SWH after her marriage.

Norah’s husband, John Lachlan Cope, was born in 1893 and had been studying medicine at Cambridge before he joined Ernest Shackleton’s Imperial Trans-Antarctic Expedition, 1914-1917, as a biologist and medical officer aboard Aurora. The expedition required two ships: Endurance under Shackleton for the Weddell Sea party, and Aurora, under Aeneas Mackintosh, for the Ross Sea party. The expedition was beset with problems. Click here for more information.

In May 1915, Aurora was driven from her moorings by a blizzard, leaving the shore party marooned. With minimal supplies, John and nine companions wintered at Cape Evans and laid depots southwards across the Ross Ice Shelf as far as Mount Hope. Only seven members of the shore party survived. They were eventually rescued in January 1917.

John served in the Royal Navy for the remainder of WWI. After the war, he lectured on his polar exploits and worked as a teacher and journalist before leading the British Expedition to Graham Land, 1920-1922.  The original intention was to circumnavigate Antarctica for five years and establish a number of scientific stations, but a lack of financial support meant the expedition was cut short. For more information and photographs, see the Scott Polar Research Institute website

On his return to Britain, John resumed his medical studies, qualifying as a doctor in 1933. He became a General Practitioner, working in London until the outbreak of WWII and then in Birmingham.

John and Norah had four children. The National Portrait Gallery website has seven portraits of Norah and her children

Norah died in March 1947, in her early fifties. John remarried but died in December the same year.