Frederick’s father, Leonard, was a farm labourer from Chisbridge Cross near Marlow and his mother Alice (nee Shepherd) was from Rockwell End. After their marriage they lived at Wood End, Medmenham. Frederick was born in Horton in mid-1894. By 1901 the family was living at Victoria Cottages, Horsemoor Green, Langley.

Frederick became a gardener and in the 1911 census, he was working at Ditton Park, giving his address as The Gardens there, presumably living in workers’ accommodation. His parents were also living at Ditton Park, at London Lodge, with Frederick’s three sisters: Elen, born in 1899 in Stoke, Slough; Beatrice Annie, born in Langley c1903; and Hilda Alice, born in Stoke, Bucks, c1910. Another daughter, Emily Kath, was born in early 1912, with her birth registered in Eton, the local register office.

Fred with his parents Alice and Leonard 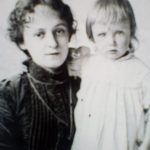 In August 1914, the 1st Battalion was stationed at Warley, London District. They joined the 20th Brigade of the 7th Division and moved to Lyndhurst. On 7 October 1914, they were mobilised for war and landed at Zeebrugge. The Division engaged in various actions on the Western Front including The First Battle of Ypres (Oct-Nov 1914) after which only 4 officers and 200 men remained of the Battalion. Frederick was one of those men. (There is a possibility that Frederick would have known John Gillis Butt, also a resident of Datchet, who was the doctor attached to the 1st Grenadiers.)

The January 1915 issue of Datchet Parish Magazine reported that Frederick had been taken ill: “We are sorry to hear that Private F Keeley, Grenadier Guards, is invalided at one of the Field Hospitals suffering from rheumatic fever.”

Frederick returned to the Front and survived until 10 March 1915 when he died from his wounds. His Soldier’s Effects document, part of his military records, gives his place of death as No 26 Field Ambulance which suggests he may have died on the same day as he was wounded, on his way to hospital.

In The Grenadier Guards in the Great War of 1914-1918, which is available to read on the archive.org website, Lieutenant Colonel The Right Honourable Sir Frederick Ponsonby, late Grenadier Guards, provides a detailed account of each battalion’s movements. This gives an indication of what Frederick might have experienced in February and early March 1915.

“February found the [1st] Battalion still in the same trenches which had by now been greatly improved. The problem of the water had been partially solved and the men were able to take some pride in their trench line. There was a certain amount of sickness with occasional cases of influenza. A motor ambulance, presented by Captain J A Morrison to the Battalion, arrived, and while the officers and men much appreciated the gift, the Medical Authorities were much concerned at the irregularity of the proceeding.

“There had been a certain number of casualties among the men from sniping and shell-fire, but the greater part of the losses were from sickness. On March 3, the Battalion was relieved by the Canadians, and billeted in the Rue du Bois. It marched the next morning to Neuf Berquin, and on the following day to Estaires. On 10 March [the day Frederick died of his wounds] it joined the rest of the 20th Brigade, which was on the main Estaires to La Bassée Road.

“Before taking over the trenches, Lieutenant Darby was sent up to go over the ground so that he might be able to guide the companies when they went up. At luncheon-time [on the 10th] he returned with the intelligence that the shelling in the front trench was terrific and that even as far back as the reserve trenches the noise was deafening, all of which seemed to point to a lively time for the Battalion.”

In a later chapter about the 1st Battalion, Sir Frederick writes:

“It was on 10 March that the attack [at Neuve Chapelle] began. At 7.30am all of the troops were in position and a powerful bombardment from our massed batteries was opened on the trenches protecting Neuve Chapelle, but the enemy made no reply. After thirty-five minutes’ bombardment the infantry advanced; the Eighth Division and the Garhwal Brigade from the Anglo-Indian Corps attacked and captured the village and entrenchments. But the success thus gained was more or less thrown away, owing to the delay that occurred in bringing up the Reserve Brigades. All day our men waited for reinforcements to continue the advance but by the time they arrived it was dark. So there was nothing to do but wait until the next morning and meanwhile the Germans had had time to bring up more troops.” 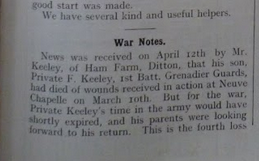 Datchet Parish Magazine carried details of Frederick’s death in the May issue. This read: News was received on April 12th by Mr Keeley of Ham Farm, Ditton, that his son, Private F Keeley, 1st Batt, Grenadier Guards, had died of wounds received in action at Neuve Chapelle on March 10th. But for the war, Private Keeley’s time in the army would have shortly expired, and his parents were looking forward to his return.

Frederick has a grave at Estaires Communal Cemetery. He was buried in Plot III, Row D, Grave 10.

The town of Estaires was occupied by French cavalry on 15 October 1914 and passed at once into British hands. The town was a Field Ambulance centre so the ambulance carrying Frederick may have been on its way there when he died of his wounds.

Frederick was awarded the 1914 Star, Victory and British Medals. His records list him as a Guardsman; the rank of Guardsman replaced that of Private in all Guards Regiments in 1919, an honour awarded by the King in recognition of their great effort during the War.

The military records list Frederick as a resident of Datchet. The last known address for his parents was 20 Ditton Road, Datchet (now renumbered as 40 Ditton Road).

Update: In July 2020 we received an email from a descendant to let us know what happened to Fred’s family and some family photographs: ‘I would like to say thank you, I’ve learnt so much about my great uncle Fred from this website. His sister, my grandmother, Elen Keeley married Percy Ruthwin Bowd on 12 October 1929. They had one child Peter John Bowd, my father, who married my mother in 1959. I am the youngest of their two children. Elen died 7 June 1981, Percy died 1990, and Peter died 2004. My great aunts Beatrice and Hilda died in the mid- to late 1980s and my great aunt Emily Kath (we knew her as Kath) died in December 1994. Beatrice (Beat to the family) never had children. Hilda had twins who died within six months of their birth; they are buried in the cemetery in Ditton Road. Hilda had a daughter after the twins. Kath had three children. I do hope you don’t mind all this information. Many thanks again.’