DVS has been working with the Parish Council to help protect Datchet’s listed milestone which was knocked over and damaged by a vehicle in September 2018. It has been temporarily cemented in place while a decision is made about its future conservation and possible relocation for its own safety. At the moment, it is particularly vulnerable to further damage by vehicular impact. The section of the stone closest to the road has been damaged and some of the lettering is missing. The lower section also suffers from salt-spreading, rainwater sprayed from the gutter, and exhaust pollution. It has no gravel breather margin and the temporary cement repair is also detrimental, causing ‘wicking’. In its current location, the milestone is suffering significant ongoing and disfiguring decay. Its location and insecure temporary fixing mean it is at real risk of damage or loss.

DVS has liaised with The Milestone Society and produced a report for the Parish Council which can be found here (milestone report). The proposal is to move the milestone to the village green. The Parish Council is submitting a planning application to the Borough. Heritage England has also been consulted. 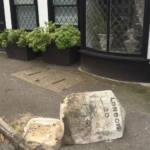 Datchet’s listed milestone was knocked over and damaged again by a vehicle in July 2019. It has now been removed temporarily and is being stored in the Parish Yard until it can be reinstated. The Parish and Borough Councils have agreed, in principle, that it can be moved a few yards to Memorial Green out of harm’s way, but there was some concern that moving it might result in the loss of its listed status. Marjorie Clasper, DVS Secretary, consulted Historic England and recently received some encouraging news from their listing adviser: ‘Generally the significance and historic authenticity of a milestone will be linked to its positioning and this would be a relevant factor in any listing assessment, however, here there are clearly practical reasons for moving this stone a relatively short distance. As long as the relevant local Borough Council process is adhered to then it is anticipated that we would simply process any future request to reassess this as a straightforward minor amendment to the List entry in order to record its new position.’

The milestone’s future listed status will also depend on its condition and other relevant criteria at the time of assessment, but the Historic England officer advised that the Parish Council should not be deterred from proceeding with the planning application for the work.

It is believed that the stone has been moved several times in the past but it has been suggested to place a plaque, or similar, on the pavement in London Road to indicate its previous position.