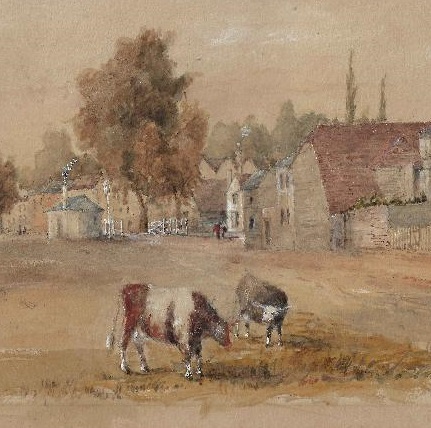 Alison has been keeping a watch on ebay and recently came across two lovely small watercolours of Datchet, painted around 1850-1860. They are not signed or dated but are the earliest pictures of the village yet known. The Barker Bridge House Trustees were very interested in them as well because one shows The Royal Stag before its Victorian front blocks were built. Using the last of our legacy plus a generous grant from the Barker Bridge House Trust, both paintings have now been bought, restored and framed. These paintings were on display at the 2018 AGM with three of the 1870s’ Corden paintings and the earliest photos of the village. Janet talked about what they all reveal and how we can date them. (They were on display again in July at the Village Fete.) 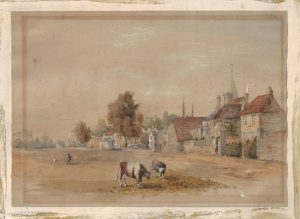 ‘Cows on the Green’ before restoration 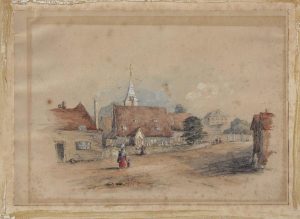 ‘Royal Stag and the Church’ before restoration

Also from ebay, we recently bought a Victorian Jubilee medal. These medals were minted to commemorate Queen Victoria’s Golden Jubilee on Tuesday 21 June 1887. There was a church service and procession through the village and the Victoria Oak, a gift from the Duchess of Buccleuch, was planted on the village green. There was much rejoicing and singing of the national anthem and when the school children returned to school they were all given a Datchet medal on a blue ribbon. ‘Our’ medal, see pictures below, was on display at the AGM as was the WWI ‘Dead Man’s Penny’ in memory of John Marcus de Paravicini, bought a couple of years ago. 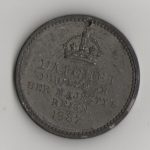 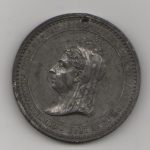 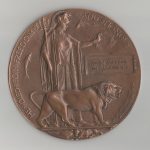