There have been Lewins in Datchet since at least the 1700s. James Albert Lewin, remembered on Datchet’s War Memorial, was the third in a line of James Lewins in the village.

His grandfather, James, born in 1826, was a general dealer at Datchet Common. He married Harriet Hunt and they had at least 10 children, many of whom remained in the village.

His father, James, born in 1860, was a builder and bricklayer. He married Jane Thomas in 1881 and they set up home at Pitts Gardens, near Penn Road. By the 1891 census, James and Jane had three sons, eight-year-old James Albert (known as Jim, baptised 10 August 1882), six-year-old Thomas (Tom), and four-year-old William. They were living at Alma Place.

Rather than going to the pub, Jim’s father spent his spare time and money building a home for his young family on a plot at 18 Penn Road. He used to say that every drink he missed bought another brick and so he named their house Temperance Cottage. Before the reservoir was built, the cottage had views over the fields and the polo ground. The family grew their own vegetables and kept pigs in a sty and ducks and chickens in the yard. They had their own water pump and an outdoor toilet.

In 1894, another child, Eleanor, was born at Temperance Cottage, a sister for the three boys. She was said to be the first baby born in Penn Road which was then not much more than a rutted cart track. Much later, in a 1964 newspaper interview, Jim’s brother Tom remembered that during Eleanor’s first winter, Datchet experienced a severe flood which left its waterline four feet up the wall of the Working Men’s Club (now the library). The family with their young baby had to evacuate the flooded ground floor of Temperance Cottage and move upstairs. Their father brought food from the village by punt while their mother tried to cook on a fire grate. The flood was followed by a frosty new year which brought a covering of ice on the Thames and ice-skaters to Datchet’s waterfront.

Tom’s newspaper interview tells us what Christmas Day was like for Jim and his family at Temperance Cottage. The house was filled with the smell of a chicken roasting and a plum pudding steaming on the open range. The boys put on their best Eton collars and knee breeches for their obligatory visit to church and in the evening relatives and friends came round for a glass of parsnip or elderberry wine. They all gathered around the piano, under the homemade paper chains and light of the paraffin lamps, for carols and a sing-song. ‘We had a great time making our own fun,’ Tom told the reporter.

Following in their father’s footsteps

All three boys, Jim, Tom and William, learned their father’s trade and followed in his footsteps. Tom started off driving a horse and cart for his father, taking bricks from Langley to the village branch of Barclays Bank (now Julian Bettney’s art gallery) which was then under construction. Around 1904 their father took on the council contract to clear cess pools and collect refuse. Their carts had to be out of the village by 7am so the unpleasant work, done with a hand pump, had to be completed during the hours of darkness.

Marriage and a young family

Christmas 1905 was particularly special for Jim. On 25 December, aged 23, he married Bessie Sophia Cutler, a local girl from Eton Wick. Jim and Bessie lived at Temperance Cottage where they had three children, Bessie Elizabeth, born 1907, and William James Albert, born 1909, and Mabel born 1911. Jim’s parents and sister Eleanor moved to Eleanor Cottages, a group of four cottages which the family had also built in Penn Road.

Work sometimes took Jim away from his young family. In the 1911 census, he and his brother William, both recorded as bricklayers, were lodging with a family in Salisbury.

Many of the Lewin men signed up to fight. Datchet’s Roll of Honour lists 11 Lewins, all related.

Tom joined the local defence volunteers. He was drilled in Holmlea Road by the local police sergeant Benning, a former colour sergeant in the army, and was called to active service in France with the South Wales Borderers.

Jim enlisted in Windsor as Private 19394 of the Royal Berkshire Regiment. He joined the 1st Battalion, was moved to the 2nd, then transferred to the 6th which landed in France in July 1915.

Jim’s wife, Bessie, gave birth to another child, Ivy, in spring 1916 but it’s not known if Jim ever had the chance to see his baby daughter.

The 6th Royal Berkshires at the Third Battle of Ypres

The 6th Battalion Royal Berkshire Regiment website shows the itinerary of the 6th  from the date it landed in France in 1915. See also itinerary part II.

The 6th Royal Berks website has a photograph of the Battalion, right, probably taken in July 1917. Is Jim pictured? Perhaps the man with the moustache on the far left? The photograph was sent by Private Ernest Harrison of Reading (marked with a cross) to his mother. The message reads: ‘Just a line to let you know I am still alive and kicking. According to this I am getting as fat as a Berkshire Pig. Don’t you think so? Tons of love and kisses. Ernie.’ Private Harrison was killed on 31 July 1917. (Photograph and information from Arras to Cambrai. The Kitchener Battalions of the Royal Berkshire Regt., 1917, by Colin Fox and others.)

In November 1917, during the Third Battle of Ypres, the 6th Royal Berkshires were on the front line near Boesinghe (now Boezinge). It was here on 6 November that James Albert Lewin was killed in action by the bursting of a shell.

On the BBC History website, Paul Reed writes: ‘Situated north of Ypres along the Yser canal, fighting came to the area [Boezinge] during the gas attack of April 1915. French forces, thrown back across the Pilkem Ridge, dug in just short of the canal and village, and here the front lines were stabilised for the next two years. The British arrived in June 1915, and regiment after regiment passed through this sector of the battlefield until the ground was cleared in the opening phase of Third Ypres in July 1917. By this time little remained of Boezinge, and the ground east of the canal had been turned into a desolate crater zone of shell holes, mud, muck and slime.”

Two days before Jim was killed, the 6th moved to the front line. The battalion’s diary entry for 4 November 1917 reads: “8.15am: Battalion marched to Proven and entrained for Boesinghe. 12 noon: Arrived Boesinghe where dinners were served. 3.30pm: Battalion left Boesinghe for front line, rations were carried for the whole three days tour in the line. Quiet journey up. Relief complete by 8pm.”

Jim’s death was reported in the Datchet Parish Magazine in December 1917, left. The same issue of the Parish Magazine also reported that his cousin, Sidney, of 7 Ditton Road, had escaped from a German prison camp and two other cousins had been severely wounded.

On 8 March 1919, the Slough Eton & Windsor Observer reported that five of Jim’s cousins, sons of his Uncle Robert and Aunt Susan Lewin, had all returned from the war.

Tom returned home in 1919 with a shrapnel wound to his arm. Jim’s widow, Bessie, remarried in 1920. Her husband, Victor Lewin, had been in the Royal Horse Artillery. They had three more children and lived at 3 Eleanor Cottages, next door to Jim’s parents, James and Jane Lewin. (You can read more about these streets and houses on the Datchet History website, see: http://datchethistory.org.uk/horton-road-east-ditton-road-holmlea-road-new-road-penn-road/)

James Albert Lewin is remembered on the Tyne Cot Memorial, at Zonnebeke, West Vlaanderen in Belgium. The memorial bears the names of almost 35,000 officers and men whose graves are not known. It is one of four memorials to the missing in Belgian Flanders which cover the area known as the Ypres Salient. He was awarded the British War Medal and the Victory Medal. 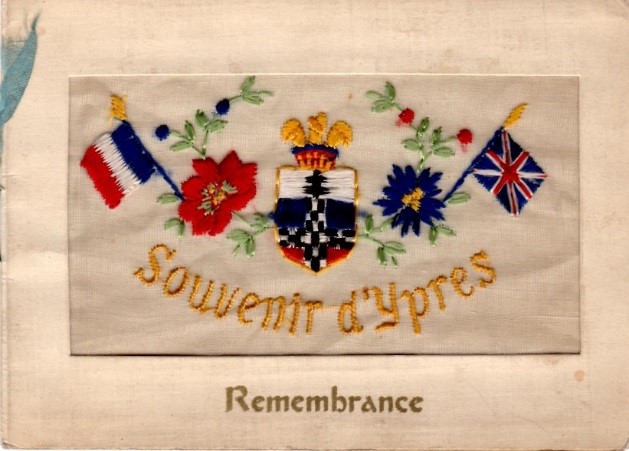 Jim sent this card from Ypres to his sister Eleanor